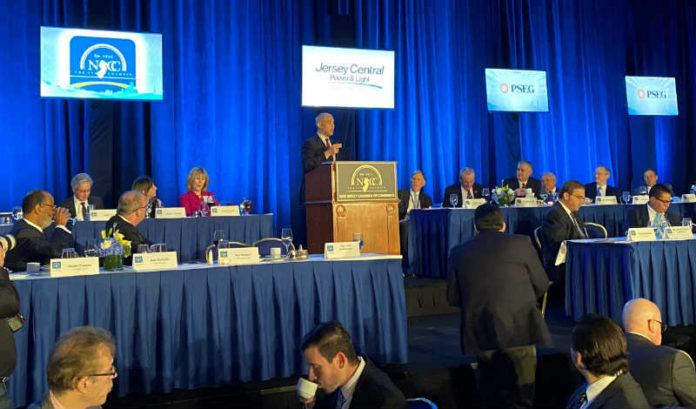 It wasn’t quite the preacher-perfect, sweat-from-the-brow, nearly hourlong speech that he riveted the audience with two years ago.

On that night, it was a speech in which the leaders of the New Jersey business and politics left the Walk to Washington dinner saying, “Now, I see why he’s running for president.”

Last Thursday night, at the 2020 version of the New Jersey Chamber of Commerce‘s annual networking event, U.S. Sen. Cory Booker was just as charismatic and captivating, in a much shorter speech that had some in the audience thinking, “Why didn’t he catch on as a presidential candidate?”

The passion was there.

“These are real, pressing issues that are not left or right, they are right and wrong,” he said. “Who are we going to be?”

So was the list of accomplishments, Opportunity Zones and Fair Chance Act legislation among them.

And, most of all, there was the sense of spirit and goodwill — especially when he discussed his failed presidential run.

“My whole campaign was about what I learned in New Jersey and this idea that we are better when we stand together, when we work to put the word ‘indivisible’ into this one nation under God,” he said.

So how did all this get lost in the noise of the presidential campaign? Why did Booker, unlike almost every other of the nearly two dozen Democratic candidates, never really get his day or week in the spotlight during the campaign?

Ben Dworkin, the founding director of the Rowan Institute for Public Policy and Citizenship, heard the speech. And he has a theory about where nice guys finish. At least, this go-around.

“I think the way we understand the Booker campaign in 2020 is that he might’ve been the right man at the wrong moment,” Dworkin said. “He obviously has a message, he obviously is qualified and he obviously has tremendous political talent.

As we head into Super Tuesday, the fact that Booker’s message isn’t still being heard is a missed opportunity. It may not have gotten lost in the noise this week. It came through loud and clear last Thursday night.

“I want to tell you right now that I am worried about  my country,” he said, before rattling off a whole host of campaign issues: We need to do more about education — everything from universal preschool to providing opportunities in underserved communities such as Newark to making sure the best and brightest college grads are not forced to leave the country due to visa issues, he said.

But mostly, Booker talked about solving problems together.

Booker explained about how his time in Washington, D.C., has shaped his views — and gives him reason for concern about the American Dream.

“What I’ve learned on the Senate Foreign Relations Committee is something we don’t talk about enough: While we’re tearing each other apart in this country, we have enemies and adversaries who have a different way of life, who are taking joy in seeing the American experiment at risk,” he said.

“And, let me tell you, in the context of the planet Earth, between the authoritarian governments and free democracies, the last decade hasn’t been so good. The scorecard is there. Hungary’s falling more toward authoritarianism, Turkey turning more towards the theocracy, even India (is a concern) with Hindu nationalism on the rise. China is moving even more toward an authoritarian country by getting rid of term limits.

Booker left the room with a challenge. He said it’s the same challenge he gave in town halls across Iowa.

It’s a challenge from a figure that should have been more embraced himself. Will that day ever come? Dworkin isn’t counting out Booker just yet.

“It could be a different mood in different times,” he said. “Presidential campaigns are often about timing. Barack Obama was two years into his Senate term and had only given one big speech. But he beat Hillary Clinton and went on to be a very successful president. He was the right person at that time.

“We look at Chris Christie and the chance to be the candidate in 2012. He continually said, ‘I wasn’t ready.’ But, you know, I think that might’ve been his best chance.”

For Booker, it all may come down to whether the Democrats retake the White House, a scenario that would close Booker’s window of opportunity for another eight years.

Candidates need passion — some of those trying to buy their way to the nomination are learning that.

Booker needs timing. And only time will tell if he’ll ever get that.

An alarming truth: As unemployment rises, so do car insurance rates