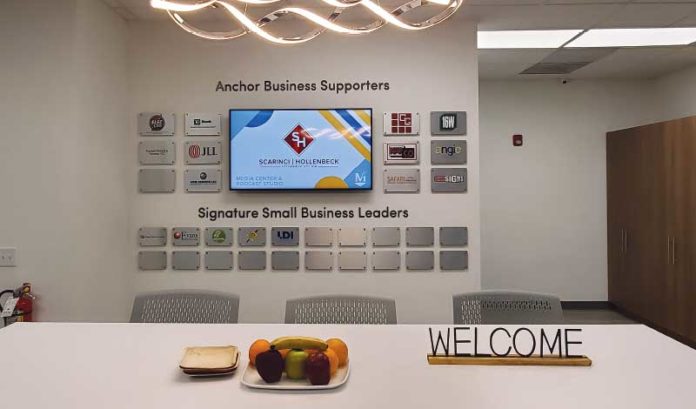 It was only after Jim Kirkos had convinced his board that the Meadowlands Chamber needed a new headquarters — one with a modern business vibe delivering a new array of resources and one that would cost more than a half a million dollars to create — that he got nervous.

Where would the money come from?

Then Kirkos, the longtime head of the chamber, got a call from Gus Milano, the head of Hartz Mountain Industries in Secaucus, and he knew everything was going to be alright.

“I needed to raise $500,000,” Kirkos said. “And to do that, we needed companies to sponsor individual areas in the facility, like the ideation zone, podcast center, collaboration lounge and the java zone. I didn’t know whether the large companies were going to think that this was too cute for them in terms of the designated area names. Then, our friends at Hartz called me the day after I sent out the initial letter. Gus Milano said: ‘Jim, save us the collaboration lounge and java zone. It’s cool.’

“That’s when I knew this was going to be OK.”

More than OK. The initial fundraising drive has attained pledges in excess of the initial goal, allowing Kirkos to build a space in Lyndhurst that he would have never dreamed of when he was sitting in his old headquarters a year ago, which had a few offices, a few cubicles and one conference room.

It’s not just that the new space — which includes executive offices across the hall — is more than twice the size of his previous facility, approximately 7,000 square feet to 3,100. It’s that the space is used in a modern way.

Kirkos has created a headquarters that includes the Meadowlands Live! Visitors’ Center, networking and open office style meetup space, and a working presentation learning center that can be used by all of the group’s nearly 1,200 members.

There are huddle rooms (where private meetings can be held and business can be conducted), ideation and collaboration zones (where brainstorming sessions can be held), a podcast center (you want to get into more multimedia content, start here), quiet zones (if you need to get work done and you don’t want to go back to the office) and a large presentation room (where the chamber itself used the video wall to conduct all of its Skype interviews for a recent position).

It also includes the Meadowlands 2040 Foundation Innovation Learning Center, a high-tech room that will allow unique learning programs in collaboration with the region’s colleges and universities.

And, while Kirkos points to the practicality of the place (all of the areas are equipped with all the latest technology needs), he feels it’s the ideology around it that sets it apart.

“Going forward, much of a chamber of commerce’s mission will basically remain the same. It’s a group for economic and workforce development advocacy, transportation infrastructure, master planning and resiliency. But, we must incorporate new tools to help our members succeed and overcome disruptive trends.”

Kirkos feels the Meadowlands Chamber will be a trendsetter.

“I think you are going to see a lot of business groups going to this model,” he said. “We all need to adjust to the modern needs of business.”

And, while he’d like to take credit for the idea, he’ll only take credit for seeing the opportunity to implement something he heard Mick Fleming, the longtime former head of the Association of Chamber of Commerce Executives, talk about.

“He had done a future study for the chamber world a bunch of years ago that said chambers are going to continue to struggle if they don’t find relevance and they don’t adapt to new entrepreneurs, new startup companies, because new business owners are doing business in new ways,” Kirkos said. “We not only have to adopt technology; we have to adapt to new work rules.

“They may want to network seven days a week. We’ve always been a Monday-through-Friday event business, but new entrepreneurs want to have meetings late at night and on weekends.

“What does that mean? I can envision in the future being open six or seven days a week from 8 in the morning until 10 at night. If you need to meet somebody, this place should be open. That’s the only way it can become a central hub of collaboration, of education and of networking possibilities and opportunities.”

Selling this vision to his board was not hard.

“They all got it right away,” Kirkos said.

As for money, plenty of companies were willing to pitch in.

Other companies also contributed. And it appears many members are taking advantage. Kirkos said there were more than 300 visitors in January, the first full month the facility was open.

More importantly, it was visitors of all sizes. Companies can use the facility even if they come in at the lowest level of membership. It’s a way, Kirkos said, to attract the next generation of businesses at their starting point.

And that, Kirkos said, is how the Meadowlands Chamber will maintain and increase its stature in the community.

“When I was conceiving this, I met with the board and said, ‘OK, tell me if I’m crazy,’” he said. “Push back at me if you think I’m going in the wrong direction. And not one person pushed back. They said: ‘No, this is the next generation of what we want to be as an organization. And we want to lead. We want to show our members that there’s lots of opportunities out there.’”

“We needed to create a visitor center,” he said. “We needed to be able to show visitors all the assets in the region in addition to American Dream — Medieval Times, RPM Raceway, Meadowlands Racetrack, Liberty Science Center, all the great ethnic restaurants, billiard places, movie theaters, specialty retail — things like that.

“Now we have a mechanism to be able to showcase all that the region has to offer in a pretty significant and cool kind of way.”