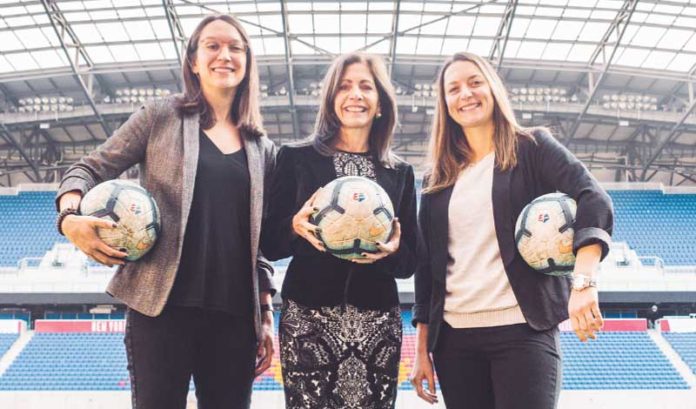 Now charge someone with completely transforming it for success within a year.

Who would you choose — and why?

For first lady Tammy Murphy, it meant choosing a leadership team of confident and accomplished women.

“I have loved the three of us working together on this, because we all complement one another,” Murphy said. “There is great momentum for us as a team right now.”

Murphy was referring to Sky Blue FC, New Jersey’s professional women’s soccer team, and the new leadership’s tireless work this year to address in totality several challenges the team has faced over the last few years.

The transformation started with Murphy and gained traction with the addition of Alyse LaHue, one of two female general managers in the league, and Freya Coombe, the only female head coach in the league.

It has resulted in the team moving to Red Bull Arena in Harrison; the drafting of another U.S. Women’s National Soccer Team player; and the team already doubling its season ticket base prior to its spring debut.

“The wind is now at our back, and we have aspirations to become the gold standard across the league in every capacity,” Murphy said.

Murphy and her husband, fellow soccer fan and now-Gov. Phil Murphy, founded Sky Blue FC in Tinton Falls in 2009 with Women’s Professional Soccer, then the top-level professional women’s soccer league in the U.S.

“When our daughter was playing soccer, we’d have conversations about how it was clear, if you were male and wanting to play professionally, what the steps were to get there,” Murphy said. “But as a woman, there was nothing.

“We wanted to help provide a platform for these professional women athletes because it was missing.”

The duo has since been majority shareholders alongside minority shareholder Steven Temares, the former CEO of Bed Bath & Beyond. They even were a founding member of the National Women’s Soccer League in 2013.

But, by 2018, Sky Blue FC’s game play on Yurcak Field at Rutgers University’s Piscataway campus proved to be severely limiting. Not only were games largely inaccessible via mass transit from New York City, Philadelphia or elsewhere in New Jersey, but the practice fields lacked basic amenities such as laundry service and proper bathrooms.

Multiple soccer and sports publications began reporting on the issues, including the lack of adequate housing for players and alleged non-reimbursement of baggage fees and medical care.

“We are not looking back — we are only looking forward,” she said. “When we started down this road not even a year ago, we literally looked at the entire organization from top to bottom.

“We tried our best to be as constructively invasive across every aspect of the organization, and I think that enabled us to know our strengths as well as the weaknesses we needed to focus on to move forward.”

Murphy said she started with the team surrounding her.

“Every study shows that, if you have females in leadership, the organization is not only more creative, but more productive — and the margins are better,” she said.

LaHue, who had served as vice president of the organization since May 2018, signed on as general manager following former President Tony Novo’s resignation in April 2019, after reports surfaced that players were working and living in below-standard conditions.

Coombe was then hired in September after the departure of Denise Reddy in June 2019, with Reddy having won just one of 33 matches.

Coombe, a former player and coach for Reading FC Women in England, moved to the U.S. to coach youth soccer in New York. She was most recently the director of scouting and an academy coach for New York Soccer Club.

Additionally, Sky Blue FC was the first club in the league to have an all-women table at the draft this season, including the director of operations and manager of communications.

“To me, it doesn’t make sense to not have women at the table making decisions at both the league and team levels,” LaHue said. “We have to have a say in what our women’s professional sports leagues are going to look like moving forward.”

For Sky Blue FC, that meant first relocating the team to Red Bull Arena in Harrison for the 2020 season, following two successful pilot-test matches at the stadium in August and September last year.

Red Bull Arena has the capacity to house five times the number of fans than at Rutgers, which only allowed for 5,000 spectators.

“The fact that we are moving our entire nexus north to Red Bull Arena, which is arguably one of the finest soccer stadiums in the U.S., just brings a whole new level of professionalism,” Murphy said. “And Red Bull Arena has been extremely good about giving us access and going out there on social media, because they get it and they’re trying to help us step up onto a new level.

“It’s been really lovely working with them.”

According to LaHue, the league also has partnered with Octagon, the world’s largest sports and entertainment agency, to handle commercial rights.

“We’ve been exploring broadcast partners and are very excited about our prospects in terms of a national broadcast footprint,” LaHue said. “That will have a tremendous impact on the league in terms of the ability for fans to access our games, plus will bring new fans into the fray.”

“Moving to North Jersey and close to New York City, we saw this as a great opportunity to drive more of the younger, single soccer fans into our games, including those fans living in the city who don’t own a car,” LaHue said.

The event, held on a snowy day in Brooklyn, was so successful that LaHue said she already is planning more sessions during the season.

Especially since Sky Blue players will now be more accessible than usual, thanks to the new benefit of year-round housing.

“It’s tremendously exciting that our players no longer have to pack up and move out at the end of the season, because now they can live and be integrated within the community in which we play and be a part of our off-season plans,” LaHue said. “It gives them a better opportunity to be known on a more local level.”

“I feel so confident about the nearly dozen staff members we have right now,” LaHue said. “We may be small, but we’re growing.

“And we believe in the live, work, play model and really integrating into the community where we’re at.”

Murphy said the drastic changes have been nothing but positive for Sky Blue FC.

“We actually have players who are excited about being a part of this team now, and it’s all building on itself,” she said.

“Everyone is feeling and wants to be a part of the momentum that we’ve got to take this team from the bottom of the league to a national title.”

Mobile no more: American Dream will be home to N.J. Hall...