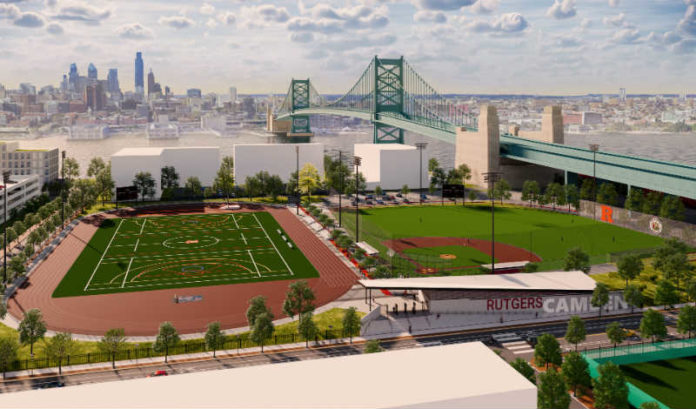 A $15 million athletic complex serving Rutgers University-Camden and city families will rise along the waterfront, according to a statement from Camden County.

The project, on eight acres at the site of the shuttered Campbell’s Field baseball stadium, will include a baseball and softball complex, a turf field for sports like soccer and a track, county spokesman Dan Keashen said in a statement.

The project has already been before the city planning board for review, he added.

“Community meetings and renderings are the first phase of a game-changing project that will result in a significant investment and further enhancement of Camden’s downtown, creating new amenities for college athletes, children and families in the city,” Keashen said. “We are working with our partners at Rutgers-Camden, residents and youth athletic organizations to develop what will be a new asset for NCAA Division III athletics and youth recreation.”

Details of the new facility include a field usable for both baseball and softball; a state-of-the-art multiuse turf field for field hockey, soccer and lacrosse; and an eight-lane track.

Rutgers will oversee security at the site, Keashan said.

“Rutgers has been an anchor institution in the city, investing in the downtown and waterfront through the development of new facilities and the expansion of their campus, which includes graduate dorms, a new nursing school, writers house and alumni house,” he said. “The athletic facility will be another important improvement to the overall campus, which will be utilized throughout the year by all segments of the city’s population.”

Keashen said he expects a contractor to be hired by early summer, with the Rutgers-Camden baseball team taking the field by the 2021 season.