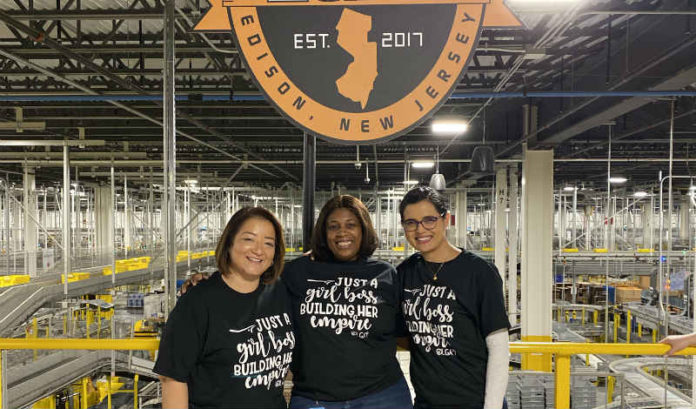 Rainy Shukla is well aware of the challenges women in STEM face. It wasn’t so long ago that she faced them herself.

“Throughout my schooling as an engineer, as well as my first professional experience at a technology company, I was faced with the challenge of most likely being the only woman,” she said. “I was literally the only woman engineer at my first company. So, I learned through that experience that I have to be my own voice, I have to be the owner of my own development in the workplace.

“I take that responsibility for being that voice for others very seriously now.”

Shukla is now the head of the Amazon fulfillment center in Edison, serving as the general manager of a facility that employs approximately 2,000.

“I lead the advanced technology and logistical operations,” she said. “I’m responsible for keeping our associates safe and engaged.”

That means helping them take advantage of all the opportunities the company has to offer — especially in the areas of STEM, she said. And especially for women.

Shukla talked about her role at Amazon in celebration of International Women’s Day. She feels Amazon is a great place for women with STEM skills — and for those who want to develop them.

“If they have a technical educational background, we have tons of opportunities within Amazon,” she said. “I would put them in touch with our internal groups with expertise in technology. They could work with them and get them an internship or a shadow program that would give them an idea of what skillsets that we are looking for.

“Based upon those skillsets, I would go to step No. 2, which is marrying those gaps with our career choice program. For example, if they are missing computer networking as part of their skill set, we do have a computer networking certification program.

Current Amazon employees who are looking to build their STEM skills can take advantage of classes through Amazon’s career choice program, which Shukla said pays about 95% of tuition in demanding fields, including robotics and technology and information technology networking.

“We partner with our collaborate school within the community and have them get started in learning while Amazon supports part of their tuition,” she said. “Once they complete that program, then they would be able to apply for roles internally, which they will have access to that outside people don’t, so they can build their career at Amazon using the skills they learned from the course.”

Shukla said the Amazon facility in Edison has partnerships with both Middlesex County College and Rutgers University.

Rutgers, Shukla said, has become a leading partner for the management track.

“We actually have a very close partnership with Rutgers, especially their supply chain and engineering programs, where we hire our managers from,” she said. “We have very high success rate of getting excellent leaders from Rutgers business school and engineering programs. We have hired several graduates every year. Rutgers is our biggest pipeline school in Edison.”

“So, there are tons of avenues where we as a company support the community as well as our own employees in Edison and Middlesex County.”

Shukla stressed how Amazon has made a commitment to female leaders. And there’s no greater example than her facility.

Each fulfillment center has a three-legged stool of leaders, Shukla said. There is a general manager, who oversees operations, as well as heads of finance and human resources. In Edison, each position is not only held by a woman, but a woman of color, the only center in the country with this characteristic.

“Diversity and inclusion are incredibly important to Amazon,” Shukla said. “We champion women of all backgrounds to seek and create more equal and inclusive workplace.”

In Edison, Christine Hernandez serves as human resources manager, while Anne Hyppolite is the finance manager.

Shukla said helping to develop female leaders at Amazon is a role she is proud to undertake.

“I’ve conducted and still go to several women in leadership conferences, which (teach) very young woman leaders to lead confidently and grow within Amazon,” she said.

That enthusiasm reaches to the next generation, too. Shukla said the facility also is working in the community through partnerships with area junior highs and grade schools.

“I have taken roles within our Camp Amazon program, which is a robotic program which fosters STEM education, into elementary and middle schools within the Edison community,” she said. “We have conducted two major programs with middle schools and conducted robotics camps for them in our facility. Being an engineer myself, I am encouraging the Edison community to learn STEM skills.”

After all, she still remembers the days when she was the only engineer on staff. That’s why Shukla has strong words of encouragement for girls who want to follow in her footsteps.