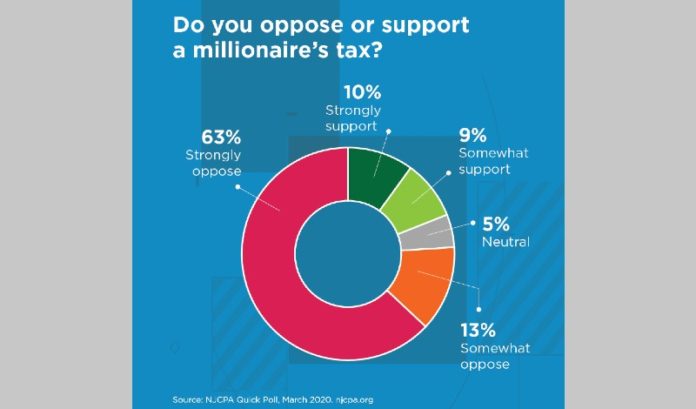 Only 10% strongly support the millionaire’s tax while 9% somewhat support it and 5% are neutral.

More than 60% of the CPAs surveyed said they would not change their level of support for an expanded millionaire’s tax, even if the additional tax revenue went toward property tax relief.

Similarly, the majority of respondents (66%) were against increasing the sales tax, which was not part of Murphy’s state budget proposal. However, 53% were strongly or somewhat in support of a proposed $1.65 per pack increase tax on cigarettes (36% and 17%, respectively). The tax would bring in a potential $218 million in additional tax revenue, according to Murphy.

Overall, nearly half (48%) believe the economy will “get significantly worse” from the governor’s proposed budget plan. Respondents cited the need for his budget to include more spending cuts to fully fund pension costs and on more fiscal responsibility.

“We welcome Governor Murphy’s commitment to growing the state’s economy. However, as an organization representing CPAs and their clients, we do not believe the Governor’s plan to tax millionaires is in the best interest of New Jersey businesses and residents and could lead to both leaving the state. The survey reflects what CPAs and their clients believe is needed to fix the state’s economy,” Ralph Albert Thomas, CEO and executive director at the NJCPA.