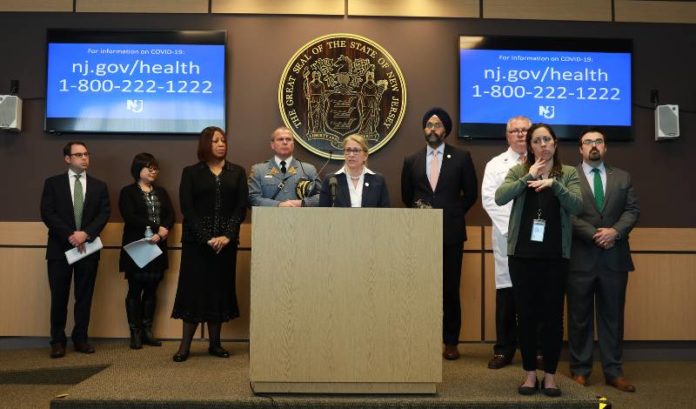 At the briefing, state Health Commissioner Judith Persichilli assigned risk “ratings” for counties that have at least one case for the first time.

All other counties were “none to minimal” risk. This includes the two counties with two cases (Burlington and Middlesex) as well as the seven counties with one case (Camden, Essex, Hudson, Morris, Passaic, Somerset and Union). The 10 remaining counties have no cases.

Persichilli did not have complete details on the six new positive tests, but offered the following:

Persichilli said the determination by the World Health Organization that this spread should be considered a global pandemic should not be viewed as an indication that risk of coronavirus in the state has increased — and said risk remains low.

“A pandemic is an increase, often sudden, in the number of cases of a disease above what is normally expected in a population that has spread over several countries or continents, usually affecting a large number of people,” she said.

“The WHO’s announcement does not trigger any new funding, any new protocols or any new regulations. But it is an acknowledgement of the disease spreading across several continents. It is not an acknowledgement that the situation in New Jersey has worsened to the point where we would say the risk is anything more than low.”

Persichilli said she has noticed that some of the confirmed cases are from a younger population.

“Which is a little bit different than some other areas of the nation,” she said.

However, she said the sample size was too small to draw any direct conclusions.