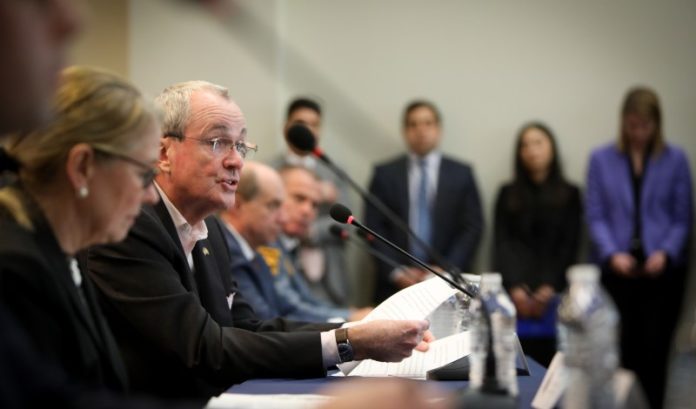 Murphy and Persichilli, speaking at the state’s daily briefing call, reiterated that this is a top priority.

Murphy said it was the first of what the state anticipates will be many different avenues to collect specimens and expand testing.

But he cautioned that the Bergen site is far from ready. And he said Tedesco is taking the lead.

Rules of potential vetting of who can go to the site — whether it be based on where you live or what symptoms you have — were unclear.

Persichilli said she hoped participants would need a note from a physician.

“Our hope is that it would be on the order of a physician so that, if individuals come up positive, we’re assured they are being treated symptomatically by their physician,” she said.

Persichilli also announced the latest number of confirmed cases, 19, bringing the state total to 69. She acknowledged the number is growing due to the increase of tests being run.

She also said the state will now consider all cases as confirmed. There no longer will be an effort to get that designation from the Centers for Disease Control and Prevention; therefore, the state no longer will use the term “presumptive.”

Persichilli cautioned residents against putting too much stake in the numbers — especially where the cases are.

“We expect numbers to increase,” she said. “We expect them to increase from North Jersey to South Jersey. And we expect that everyone will take the precautions necessary that we have discussed and shared.

“Everyone should assume that the coronavirus will be expected in their community. So, whether they have one case right now, they need to make an assumption that they may have 10 next week. They need to take care of themselves. They need to take personal responsibilities.”

Regardless of the cases near you.

“Everything we’ve been saying over and over again (in regard to hygiene) applies to everyone, whether there’s zero positives in their county or if there are 10 or 12 or 13 or 20,” she said. “I just need to say that.”

“We understand the anxiety,” he said. “We get it. We’re going through something we’ve never been through before. We’re doing everything we can to lessen that.

“But everybody has to make sure they are on the right side of the line of being smart, prepared, common sense, planning, being proactive — doing all of those things, but not panicking. There is no reason to go over that line.”

Other notes from the call: