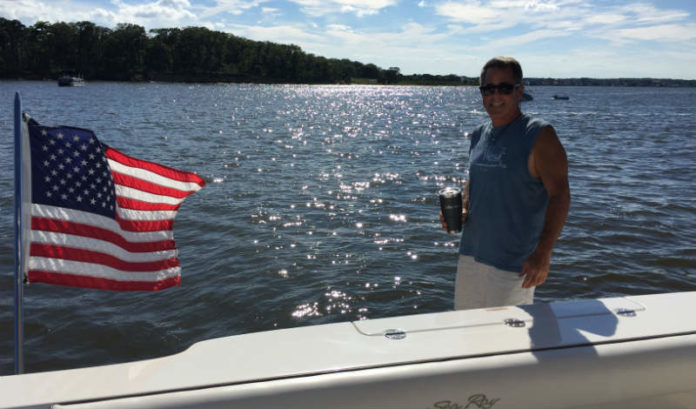 Scott Goldstein laughs when he recalls Larry Krompier rattling off demands while he was docking his boat by Baker’s Water Street Bar & Grille in Toms River.

“He really thought he was a pirate,” Goldstein said of his colleague at the New Jersey Chamber of Commerce.

Here’s the deal: Goldstein knew Krompier wasn’t a pirate. More importantly, he knew that he, himself, wasn’t a dock hand.

But that didn’t matter in Krompier’s world. When he was on his boat, The Getaway, he was in charge. Goldstein — and three chamber employees — went with it.

Much to the delight of all the kids who suddenly stopped to watch the scene.

“It was like we were in a movie,” Goldstein said.

In a time when so many of us have work friends and personal friends, Goldstein said everyone at the chamber knew they were part of a bigger family because of Krompier.

Krompier served as the chamber’s senior vice president, member services. But really, his chamber friends said, he was the unofficial motivator of the group.

“Larry’s big personality and vast emotional intelligence brought laughs, insights and compassion to our office and our lives,” Goldstein said. “No matter how stormy things got, Larry had time to listen.

“If you needed to talk, he would invite you to grab a seat in his office — decorated with photos of his wife, Noreen, and his kids — and he would push aside his computer and make eye contact.”

And, if you needed a boost of energy, well — you just needed to hear Krompier come in.

“I’ll miss hearing him run up the stairs with the speed of an athlete to fill four bottles of water and to say hello to everyone on the second floor,” he said.

“I knew something good was happening when I heard his laugh echoing down the hall,” Goldstein said. “Our conversations were full of fun and substance. Larry’s ideas were always constructive. His advice was always helpful.”

Krompier was born in Newark and grew up in Union. Following his graduation from Union High School, he continued his education at Rutgers University, graduating with a bachelor’s degree in business administration, with a concentration in marketing.

He was a proud employee of the chamber in Trenton for the past seven years. Prior to that, he was executive director of the Lakewood Chamber of Commerce.

He started his career at Seal-O-Matic Industries Inc., a family-owned business that was opened by his father, Norman Krompier, in 1967. He served as the company’s president from 1994 until the business closed in 2007.

Krompier also felt privileged to serve as an honorary commander at the Joint Base McGuire-Dix-Lakehurst for the past several years. As the son of a World War II veteran, he was thrilled to be able to continue honoring and supporting the military through this program.

Boating, however, was his biggest thrill.

He tried to spend every weekend from May to September aboard The Getaway, which he referred to as his happy place — and where many family memories were made for more than 25 years. Achieving his OUPV Boating Captains License in 2019 was one of his proudest personal achievements.

He is survived by his loving wife, Noreen (Lyons), daughters Ashley and Shelby, stepson John, sister and brother in-laws, and many nieces and nephews.

And he’ll be remembered fondly by all his friends at the chamber.

Goldstein talked about the times they would be out, singing and having fun.

“The first time he invited us all on the boat, it sunk in that we were beyond work friends,” he said. “And I guess it went alright. Because he invited us again and again.”

Oh, the fun they had.

“Larry turned up the music so high that we couldn’t do anything but sing together as loud as we could while we cruised on Barnegat Bay,” Goldstein said. “Those are life moments for me. Watching him back the big boat into a slip so we can dock at a restaurant to eat dinner was a sight to behold.”

Especially when they docked at the restaurant.

“Children ran out of the restaurant to watch the great sight of Captain Larry’s ship coming in as the sun hung low in the sky,” Goldstein said. “We hung from the side of the boat and waved to the children. And they waved back.

“I don’t know if it was the tide or the tequila or the inspiring confidence of Captain Larry, but for a shining moment, we were pirates blessed with wealth and great mates and nary a worry in the world.”

A memorial gathering will be held from noon to 2 p.m. Tuesday at the Freeman Funeral Home, 47 E. Main St., Freehold. Family and friends will be welcomed at noon, followed by the memorial service at 1.

In lieu of flowers, the family said it will be accepting donations to the Bladder Cancer Advocacy Network.

To find directions, or leave a message of condolence, please visit www.freemanfuneralhomes.com.