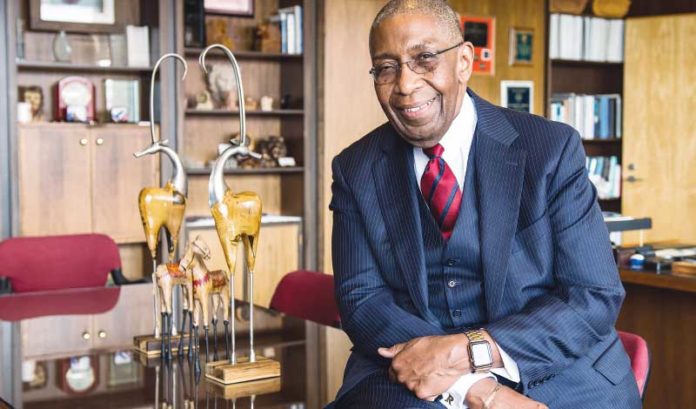 Local medical school leader Robert Johnson says it comes up all the time. A patient asks for a referral to another health care provider who’s their own race and gender. But, when it comes to finding black men in the medical field, especially a specialist like a psychiatrist …

The problem? Johnson has known it for years: Simply not enough black men are entering medical school programs.

It’s a trend that couldn’t possibly escape notice by the country’s medical school deans, he said, even if the issue’s visibility isn’t quite as well-defined in the wider population. Johnson became not just the first black man, but the first person ever, to lead two medical schools after being appointed interim dean of Rutgers Robert Wood Johnson Medical School in January. He has been a sitting dean at Rutgers New Jersey Medical School since 2011.

And deans such as him are seeing fewer applications from black men than they did in 1978.

Why just black men — not women? Data from the Association of American Medical Colleges shows that there are more black students attending medical schools today than about 30 years ago, but it’s black women training to be physicians that account for the bump. A recent report by the same organization showed that women overall are outpacing men in the country’s medical school enrollment.

Meanwhile, the proportion of black men attending medical school has slowly declined over the past three decades, with only the past two years showing a very slight uptick. Black applicants at medical schools are not just the least common of all ethnicities and genders, they also have an acceptance rate as low as 34%, according to a 2016 report by the organization.

Shereef Elnahal, former commissioner of the New Jersey Department of Health and current CEO of University Hospital, finds the trend has risen to a crescendo in New Jersey, where there are also reduced numbers of black men in medical residencies than in the past.

“That’s pretty concerning, especially because that group, black men, is among the least healthy groups in terms of health outcomes,” he said. “So, not having folks with a lived experience, a cultural understanding of some of the barriers black men face in getting access and seeking care — that’s a major problem that we have to be thinking about, not just among hospital leadership, but from a policy standpoint.”

A U.S. Department of Health and Human Services report back in 2006 indicated that people from minority individuals receive better care when their physicians have similar backgrounds.

But it’s not as if the state is utterly devoid of black medical professionals, as John Harmon, CEO and president of the African American Chamber of Commerce of New Jersey, is quick to point out.

“There are some talented (black men) who are doing work in this space, but they’re often overlooked because the perception is that they don’t exist,” he said.

Harmon points to an individual such as Adrian Harper, CEO and president of NCJ Diagnostics & DNA Technologies in Monmouth Junction. The retired advanced respiratory care practitioner spent most of his professional life working in health care, mainly in hospitals in Florida and Georgia.

In his 30-plus years of patient bedside experience, he said, it was clear people of color have for years have been “vastly underrepresented in the health care industry.” And, with the situation only worsening, Harper said there’s one longstanding hindrance that needs addressing — in both the practice of medicine and the biotechnology field he’s in today.

“Awareness to the possibilities that lie in this field,” Harper said. “That sums it up.”

Harper and his team are doing what they can to target these disparities, including making plans to attend high school and college events to educate young individuals about the clinical molecular technology field.

“It is really amazing to see the response from each participant, and even better to see how impactful a simple demonstration can be to someone’s understanding of DNA testing,” he said.

As far as what might be done to recruit more black men into medical schools, Johnson agrees it starts early in a student’s educational journey — assuming the socioeconomic factors that have long interfered with the success of this population in high school and college don’t get in the way.

In any case, medical school applications are preceded by four years of college and many high school years before that, which puts a limitation on how quickly a new narrative can emerge. That’s a fact Johnson isn’t oblivious to.

“This is not something that’s going to be a rapid turnaround,” he said. “But, I’m very optimistic, because I think there’s going to be movement on it in the long term.”

The feeling of being worst of the worst (of the worst) is easy to describe.

“And then you multiply that already-high baseline risk by five — and what you get is the experience of black women,” he said, adding that “the problem of black infant mortality is also pretty stark in New Jersey. Overall, infant mortality is among the lowest in country, which is a good thing. But the disparity between the black population and the general population is the worst — there’s a three times higher rate of mortality in black babies’ first year of life.”

University Hospital recently hosted first lady Tammy Murphy as well as the state’s health commissioner, Judith Persichilli, for a Maternal Health Awareness Day to publicly discuss some of these issues.

Elnahal said the Garden State is in a bad place with regard to the health of black women and infants, but — following the first lady’s lead — he believes the state’s health care community can have a positive effect on that.

“I think a big reason the first lady has been bringing all these stakeholders together is to capitalize on that momentum — hospital by hospital, company by company — to actually execute on it,” he said. “And that responsibility is on us in the business community.”

An inspiration to all: Kinsey retires from Saint Peter’s after more...