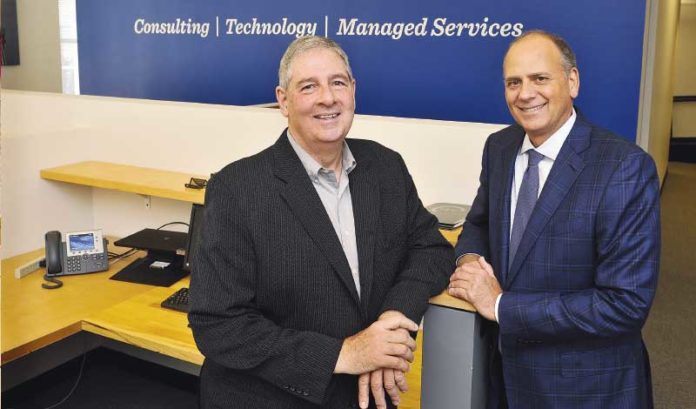 What we haven’t heard much about are “managed” services.

“We tend to be one of the best kept-secrets in public safety,” William Metro said.

The co-founder, chairman and CEO of IXP Corp. in Princeton, a 20-year-old national public safety managed services firm, said his company already has been operating in New Jersey towns such as Princeton, East Windsor and Lawrence Township.

“In fact, we’ve saved progressive- and entrepreneurial-minded municipalities and campuses millions of dollars while giving them a better level of service than they could provide themselves,” Lawrence Consalvos, co-founder, president and chief operations officer at IXP, said.

Now, after two decades of growth, IXP is ready to speak out — and be more widely recognized — for what it does.

In 1998, Metro was working as a director of engineering for MCI Communications when Electronic Data Systems acquired the company and made him director of international business development and public safety growth markets.

That’s where he met Consalvos, who was working as the managing director of public safety systems facing critical marketplace challenges.

“Local governments were fiscally challenged with finding, training and retaining appropriate public safety staff, in addition to rising pensions and the cost of long-term health care,” Consalvos said. “There had to be some relief somewhere, where services could instead be provided by private companies much more competitively.”

Metro said it didn’t take too long to realize their potential.

“What Larry and I and others in the public safety group at EDS realized was that EDS and other large companies like it were too big to give an adequate amount of attention to municipalities and campus environments, and we felt we could provide a better level of consistency,” he said. “So, we presented them with an option to buy the business, and they understood that we could give it the type of focus and dedication it needed. The clients came over with us and many are still with us today.”

More than 20 years after pioneering the first public-private partnership for a 911 communications center in 1999, IXP now provides managed services for the public safety sector in municipalities across the U.S., primarily focusing on emergency communications for law enforcement, fire and emergency medical services.

“A 911 center is an extremely complicated environment in which data, telecommunications, computing, mobile applications and radio communications must all come together as one service,” Metro said.

One that must work without fail 24/7 — which, Metro said, can be difficult when resources are spread too thin.

“There are so many things within the public safety arena that public servants do not need to do,” he said. “It’s better to have another company do it for them, because we can do it better, faster and cheaper.”

Make no mistake — the last mile of service, whether it be by police, fire or emergency medical services, is still controlled by municipalities, Consalvos said.

“But they don’t need to be managing communications, let alone the operations and technology support for their communications centers,” Metro said. “In other countries, there are even things like fleet, evidence and civilian records management that are done by private companies so that budget dollars are stretched to be more effective, as opposed to using trained officers who are really needed to provide that last mile of service to their community.”

IXP therefore works closely with communities to design and implement public-private partnerships that both elevate the performance and efficiency of emergency communications while providing financial stability.

The firm also provides operational and technical assessments and solutions.

“Part of our value proposition is that we are the only company in our space who can take a client through the entire process, from assessing the issues to building and actually implementing managed and more financially-viable solutions concerning operations and technology,” Consalvos said.

Whether it’s with local government or on a corporate or institutional campus, IXP provides its clients with the operational and technical support to run an emergency communications center.

“Many people perceive that to mean we’re going to take it out of the community and put it someplace else, but our model is actually to do it inside of that community’s existing facilities and to maximize that community’s technology and operations to increase their value proposition,” Consalvos said.

“And the value of our services and solutions are measured by how well we can seamlessly integrate into the unique fabric and dynamics of each community,” Metro said.

Since its inception, IXP has served more than 100 state and local government clients and more than 40 college and medical campuses throughout the country.

The company currently serves more than a couple of hundred clients nationally and is providing managed services for 184 jurisdictions from eight sites with more than 200 employees managing nearly 2,000 calls each day.

On average, IXP has saved its clients up to 25% of costs.

“We also tie our cost-effectiveness in with a performance-based contract that essentially guarantees we continue to meet and exceed national industry standards for our clients,” Metro said. “We are also providing an additional level of officer safety by providing as much information as we can gather from technology or from the citizen we’re speaking with.

“Over the 15 million calls that we’ve handled, we have met the national standards every month for every client, answering 90% of calls in less than three rings or 10 seconds, and dispatching 90% of high priority calls within less than a minute.”

Due to its success, IXP will employ nearly 300 at year’s end, Metro added.

“We’re positioning ourselves to take over a few emergency communications centers,” he said. “There will be a lot of hiring to either transition those people over to working with us or to augment those teams with new hires.”

The focus for 2020, Metro and Consalvos said, is for IXP to gain new clients in New Jersey, Connecticut, Massachusetts, Georgia, Arkansas, Iowa and Texas.

“New Jersey is target-rich for us, with 565 municipalities in this small state,” Metro said. “And many are still struggling to provide the type of technical support and industry knowledge needed for sizable emergency communications centers, having to hire and manage nearly a dozen dispatchers to work around the clock.

“We can take away the headaches of the hiring, training, managing and more associated with the rapid change in technology that’s occurring.”

“Our goal is to hire locally inside those communities and become part of the fabric by providing additional educational programs for elementary schools and joining neighborhood associations,” he said.

That means one thing’s certain: Even with nationwide opportunity, IXP isn’t going anywhere.

“We’re from New Jersey and have lived here most of our lives,” Metro said. “This is home.”