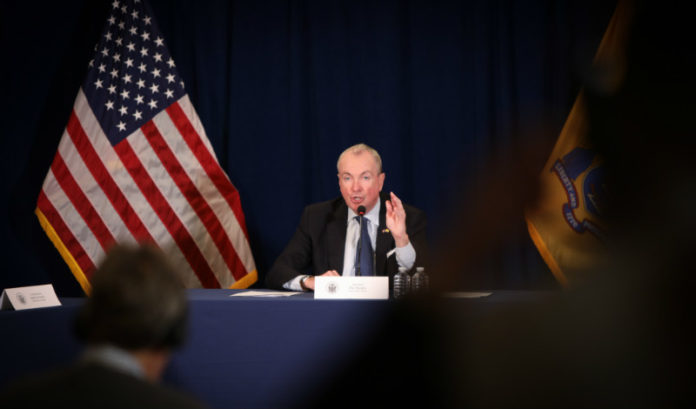 Gov. Phil Murphy did not have any major announcements at Wednesday’s daily coronavirus briefing, but there were a number of updates.

The site at Bergen Community College in Paramus will be up and running Friday. The site at PNC Bank Arts Center in Holmdel will be ready next week.

Health Commissioner Judith Persichilli said the Paramus site will be used to collect specimens for symptomatic individuals. In addition, she said the site initially will prioritize symptomatic health care workers and first responders. The site will have the capacity to collect 2,500 specimens per week.

Persichilli said she has been working with the board and administration of Inspira Health to bring the recently closed Underwood Memorial Hospital in Woodbury back on line. She expects that will happen soon, adding 300 beds to the state’s capacity.

Persichilli also said there are 260 additional beds that can be brought online soon at existing hospitals, mostly by reactivating closed wings. She said that will mean 199 additional beds in North Jersey, 11 in Central Jersey and 50 in South Jersey.

Persichilli said there were 227 more beds that could come online within the next three to four weeks.

Murphy said he and his team will meet with U.S. Army Corps of Engineers Maj. Gen. Jeff Milhorn on Thursday to see how the Army Corps can help the state build out its hospital capacity in other ways.

Persichilli also is trying to get more caregivers. She said she sent an alert to all nurses, with active or inactive licenses, for a call to action.

In addition, she said signed a directive to authorize hospitals to use New Jersey’s certified mobile intensive care paramedics in their hospital settings to perform functions and duties within their scope of practice to enhance and supplement the existing medical and nursing staff.

Both of the fatalities were women in their 60s with existing health conditions. One was in Essex County; the other was in Hudson County.

Murphy met with the state’s congressional delegation Wednesday, pleading for them to help the state get block grants of relief.

“You can’t do what we’ve done and not have a dramatic impact on not just people’s lives, but also on the health of the state’s budget and of the state’s revenue,” he said. “I talked with the congressional delegation about getting flexible block grants as fast and as soon as possible. That is the singular fastest and best way to sure up our finances.”

He said the grants and forgivable loans would be modeled after the Sandy Essential Services grants and other community disaster loans.

Murphy said he also is looking for operating subsidy funds for bus and rail transit, as well as real relief at the individual level.

“(This is) particularly for those who are struggling, and need help the most — particularly lowering the eligibility for SNAP or food stamps and free and reduced student lunches,” he said.

Limiting gatherings to 50 or fewer

“Simply put, this is not a time for anyone to be bringing people together, whether it be for wedding, a funeral, a religious rite of passage or a large birthday, anniversary or other party,” he said.

He stressed that he doesn’t want events to go underground, into people’s homes.

“If people are gathering in large numbers, we don’t care where they are gathering, it’s a public health concern and we will enforce this aggressively,” he said. “Moms and dads, I’m asking you explicitly, to make sure your kids are not having big house parties. I promise you; we’re going to be policing that.”

CVS Health looking to hire 900 in N.J. during one-day virtual...