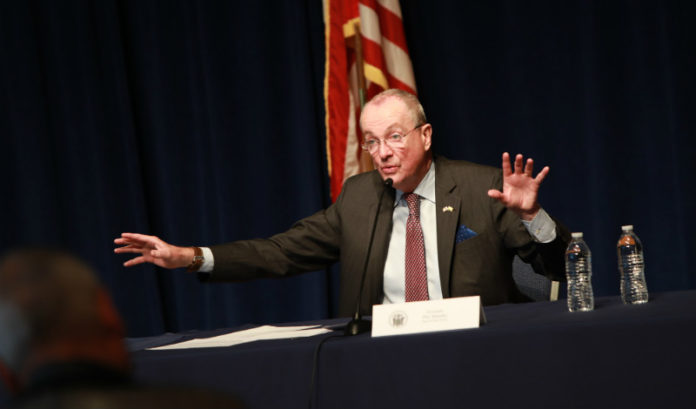 Murphy, during his daily briefing Thursday, said the state must continue to implement restrictions to prevent social spreading of coronavirus.

The governor hinted that the current 50-person maximum at a gathering could be reduced soon. And he reminded folks that the number applies to every occasion.

“The fact of the matter is, we’ve got to ensure compliance no matter what it is: weddings, funerals, baptisms, you name it,” he said. “It’s 50 people at most.

“And, if you want a little foreshadowing: If anything, that number is going down, not up. It has to be enforced. It will be enforced aggressively. We’re going to get, I think, particularly ornery about this. We mean business.”

Officials announced some of the rules for the drive-through testing site at Bergen Community College, which will open Friday.

The hours will be 8 a.m. to 4 p.m. A priority will be given to health care workers, but there is no preregistration. Individuals, however, will need an ID to prove state residency. And people will be vetted for fever, shortness of breath and cough. Those that are asymptomatic will be turned away.

Murphy said the state is reporting 318 new positive test results. Bergen County had 80 new cases (now 195 overall), Ocean had 25, Hudson and Middlesex each had 20, Essex had 17. No other county has more than 100 total.

Only two counties are without a confirmed case, Salem and Cape May, but state Health Commissioner Judith Persichilli said she is sure there are cases there.

Two things worth noting: 1) The youngest confirmed case is in a 3-year-old, though coronavirus is still hitting seniors at highest level; and 2) Only six of the confirmed cases came from the state lab, which shows how much increased high-speed private testing is contributing to the jump.

Also, there are four new fatalities, bringing the state total to nine. The fatalities:

Persichilli said she hopes Inspira Hospital in Woodbury will be opening in 3-4 weeks. Inspira Health needs to relocate some administrative personnel currently in the building, then do some basic checks to bring it back on line, she said.

“We have to do engineering and physical plant inspection, total decontamination, put in an information system, a nurse call-light system, we need to hook up all the medical gases, which we know are behind the walls. We have to make sure the HVAC is working correctly,” she said, noting those are just the top layers.

Murphy said the state’s June 2 presidential primary will go on as scheduled, though he reserved the right to amend that at a later date. He did sign an executive order regarding upcoming elections.

Murphy said he expects the Legislature to give him authority, through executive order, to suspend foreclosures and evictions. He promises to sign it as soon as possible.

“No one — I repeat, no one — in New Jersey should fear being kicked out of their home in this emergency,” he said.

Murphy said these actions come on the heels of Wednesday’s announcements by the federal Department of Housing and Urban Development that it is suspending all evictions and foreclosures on HUD-backed properties for 60 days, and by both Fannie Mae and Freddie Mac that they are suspending all foreclosures and evictions for at least 60 days for their mortgage holders.

Murphy urged residents not to hoard food or other supplies, and to resist the urge to overcrowd grocery stores.

“I know the anxiety we feel when we see news reports showing emptying shelves,” he said. “But we are closely monitoring the supply chain and we are confident in the ability of food and other grocery items to get to store shelves in a timely manner.”

Scott promoted to CEO at CentraState