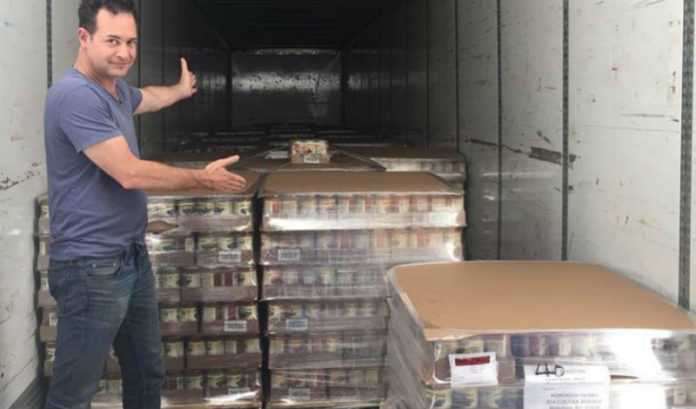 Brad Finkel woke up one morning to an unprecedentedly large order of his company’s tomato sauce on Amazon.

That was his first indication that the spreading coronavirus would spike demand for the shelf-stable product manufactured by his small business, Hoboken Farms. Soon, he had large orders abounding from abroad and the country’s first badly hit areas, such as Washington state. Then, every grocer started asking for more of the product — sometimes triple the usual order size.

Before he knew it, he had sold four months’ worth of sauce in the span of just three weeks.

As of today, Finkel is having to admit it: He’s struggling to keep up.

Finkel and his team have been working around the clock to meet the demand that surges more with every local, state and federal government pronouncement on quarantine efforts. The company manufactured enough product to restock most retailers last weekend, which allowed it to replenish the cleared shelves of retail partners such as Whole Foods and ShopRite.

But, with customers purchasing sometimes a dozen jars of Hoboken Farms sauce at a time —  stockpiling shelf-stable items in preparation for possible shelter-in-place orders — Finkel has now had to tell distributors his company might be out of stock for a minimum of two and a half weeks.

“I just have to be transparent, and it kills me, because I hate to disappoint my customers and our retailers,” he said. “My hope — and my hunch — is that everyone is going to understand that these are unprecedented times and everyone is doing the best they can. Nobody saw this kind of demand coming.”

Finkel already has a reliable supply of lids, jars, cardboard and the other components needed for more manufacturing.

“There are going to be significant backups,” he said, “but there won’t be vast supply chain voids.”

Up until now, Finkel has never had trouble getting retailers what they need. The company has been growing at a steady rate, mostly in the Northeast, ever since Finkel started the business as a farmer’s market vendor selling artisan bread and fresh mozzarella.

Hoboken Farms, which now manufactures four flavors of tomato sauce that have received various accolades, has built a brand as a producer of food with simple ingredients.

So, besides being shelf-stable, it’s comfort food.

“That might be what people are looking for right now,” Finkel said. “But, truthfully, I want to sell to happy people, not people who are stressed out, scared, as we all are. I don’t want my family, my community, my country and my world waking up nervous about what’s going on.”

Hoboken Farms is too small to take advantage of whatever opportunities there might be right now, Finkel said. But the small business owner expects to be vulnerable to any of the downsides.

Still, he knows he has it better than some small businesses. Being in the food sector, he’s aware of many peers who are losing a majority of their business clientele as more restaurants decide — or are forced — to close down.

But there’s no question: The local business owner would easily trade any upside the pandemic has brought his company for a return to business as usual.

“My feeling is that all I crave, all anyone craves, is stability,” he said.