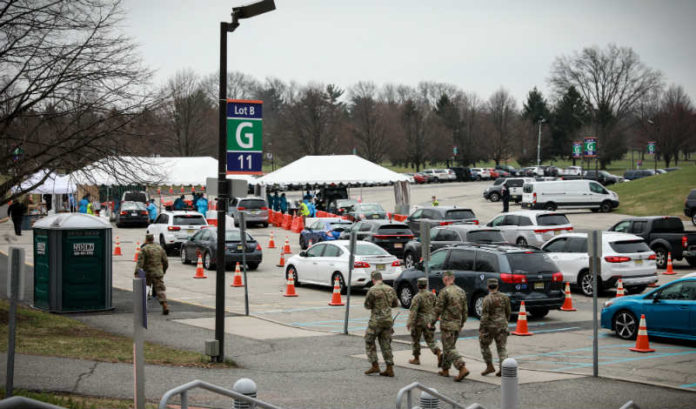 The FEMA-assisted site, which shut down early Friday, will reopen Saturday and Sunday, when the state said it intends to collect 350 specimens each day.

Murphy said the state has had ‘preliminary discussions’ about opening a third FEMA-sponsored site, but had no additional details. In addition, Murphy said other sites — without FEMA assistance — are attempting to get the resources to open.

There clearly is a demand.

The Bergen site closed around noon Friday, simply because it did not have the resources to handle the demand, according to Chris Neuwirth, the assistant commissioner of the state Department of Health.

“Make no mistake, today’s test site was a success,” Neuwirth said. “We expected to test approximately 200 individuals. And today, preliminary, we’ve tested 654. So, by all measures, it was a success.

“Recognizing the space constraints of the operation and the ability to only store a certain amount of resources on site at any given moment, the resource constraint is why we drew the line at 600 or so.

“We knew that would adjust accordingly as we moved forward. We now know that we will be storing additional resources on site to ensure that we can continue testing for all those who need it that arrive.”

“The fact that we got 600 tests done on Day One with the amount of demand is just extraordinary,” he said. “It’s beyond any wildest dreams. Secondly, I believe we have 2,500 per week at the moment. So, our hope is to be in business each day of the week.”

Murphy said the teamwork required to get this done needed to be acknowledged.

“We’re not patting ourselves on the back, because we make our share of mistakes,” he said. “Not only would I underscore that, but the amount of different organizations that were represented to make this actually happen is jaw-dropping.

“The fact that they were all able to come together and work as seamlessly as they did is a huge credit to each of the organizations.”

Murphy appears to be getting closer to mandating face coverings outdoors