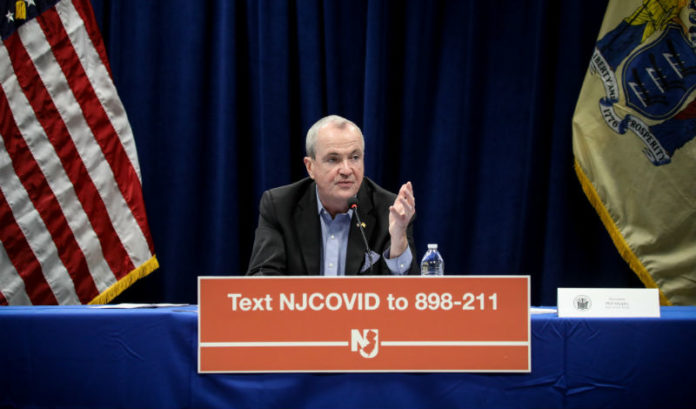 “We are at the front line of the workers who are going through hell,” Murphy said during the briefing.

It’s unclear what the new rules will be. But, on Friday, New York Gov. Andrew Cuomo announced he is ordering all workers in non-essential businesses to stay home, starting Sunday.

Murphy said the 155 number is light; he expects to hear more by end of the day. Murphy said he expects the numbers to go up as more testing takes place.

“The numbers will go into the many thousands,” he said. “But that is not a bad thing. The more information we have, the better we will be able to respond to this crisis.”

That started Friday. Murphy announced the Federal Emergency Management Agency testing site in Bergen County took 600 samples Friday — and closed at noon when it reached capacity. Murphy said site will reopen on Saturday and Sunday. The site will be able to handle 350 more tests on both days.

In the letter, Murphy, Cuomo, Lamont and Wolf wrote:

“We owe an enormous debt to the relief efforts and resources that our federal partners have already provided. But our challenges are expanding daily and just beginning. Our states have all stepped up to take unprecedented action to mitigate the spread of COVID-19 and do all we can to flatten the curve. We implore you to consider the devastating impact these efforts will have on our states — and millions of our residents — both in the immediate term and the months to come.”

A copy of the coalition’s letter can be found here.