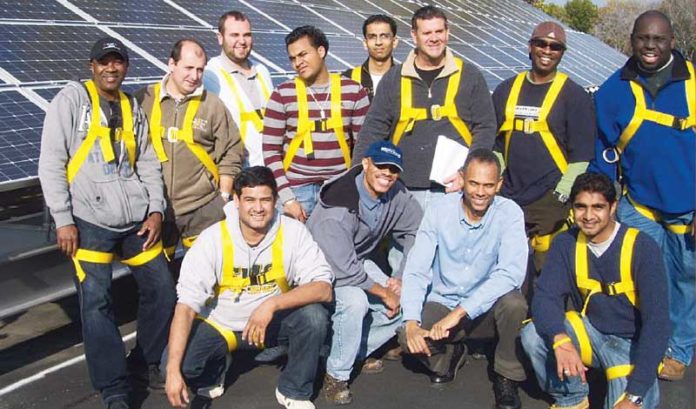 There’s no need to make visible the connections that have powered the building of the Prudential Center and MetLife Stadium, as well as New York’s monstrous Verrazzano-Narrows and Tappan Zee bridges — just a few of the major construction projects Baptiste’s LB Electric Co. has been involved with. 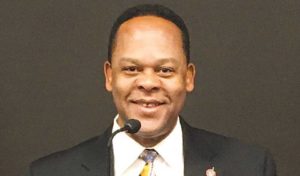 The electrical engineer and entrepreneur must feel similarly about some of the other important work he’s done to reshape the region’s landscape. Because, although there’s no account of it online, in print or anywhere else — many years ago, Baptiste developed a seemingly one-of-a-kind program to light a new path for troubled inner-city youth.

He taught them how to install solar panels.

“I really understood the solar industry at the time, and I was trying to make a community affair about it by helping youth from the inner cities with on-job training,” he said. “Some of those kids, in part former gang members, got to become installers and work for other companies.”

Through LB Training Center, as the initiative was called, Baptiste fought to put young adults from juvenile reentry programs into on-the-job training and eventually have them work for contractors to keep them employed on solar panel installation crews.

Baptiste was amazed at how readily these individuals traded their gang colors for the industry’s yellow vests. One in particular sticks out among the youth Baptiste endeavored to have an impact on.

“One of the guys told me, ‘You know, I don’t even take vest off when I go home, because I’m so proud to be working for you and doing what I’m doing,’” he said. “The street was all he knew of. What he was trained to do and what he was able to tell people he did totally changed his life.”

That means a great deal to Baptiste, who frequently credits the mentors he was able to look up to throughout his youth as the reason he pursued an electrical engineering degree from New Jersey Institute of Technology — where he would return almost three decades later to install a 50-kilowatt solar-powered system (he also sits on two of the school’s boards today).

In his family, during his Newark upbringing, he said, “Failure was not seen as acceptable.”

“But, when you’re young, you encounter a culture outside so different than what you live with in your home,” he said. “It doesn’t matter what nationality your kids are — they all need some type of guidance. And as I look back, I was glad to be able to provide that.”

Given the high profile some of the mostly preventative maintenance and testing work Baptiste’s electrical contracting and engineering firm has done throughout the years — a list he hints could soon include Newark Liberty International Airport — the company is on the larger side of contractors that are members of the African American Chamber of Commerce of New Jersey.

The potential that he could influence the development of other businesses was the whole reason he got involved with the statewide chamber.

It’s another way he’ll be helping — without most knowing it.

“If I can pass something on — because I feel as though much of what I’ve acquired wasn’t entirely on my own — that’s a good deal for me,” he said.

His collection of awards speaks to his status as a lacrosse legend.

During Trevor Baptiste’s collegiate career, the current midfielder for the Philadelphia Wings of the National Lacrosse League as well as the Atlas Lacrosse Club in the Premier Lacrosse League was the sixth player ever to earn First Team All-America honors all four years of college in the award’s nearly century-long history.

He’s also the recipient of some clear-as-day fatherly pride.

“He’s by far the No. 1 at his position in the world,” said Leon Baptiste, New Jersey businessman and Trevor’s father. “But my son is so humble to be where he is.”

The father-son duo has just started helping put together a lacrosse program in collaboration with the elder Baptiste’s alma mater, New Jersey Institute of Technology. Baptiste explained it as a way of bringing the sport into several urban areas of the state, including East Orange, Orange, Irvington and Union.

Trevor Baptiste — like father, like son — has already been using his professional expertise to coach disadvantaged youth.

“And that, to me, means more than trying to work to make money,” Baptiste said. “Giving people a pathway in life is what it’s all about.