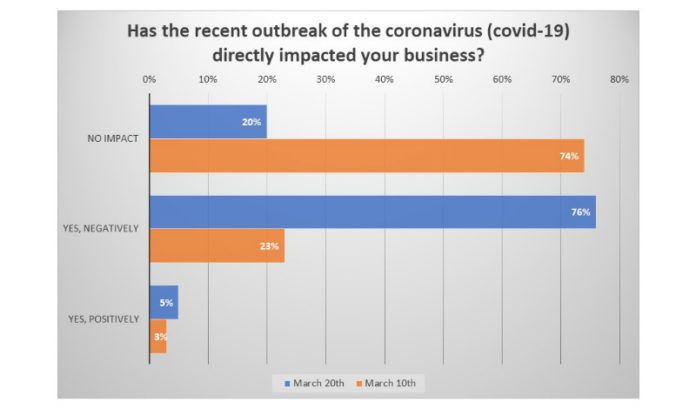 What a difference 10 days makes for small business owners.

A National Federation of Independent Business survey conducted earlier this month found that nearly three-quarters of small businesses had not been impacted by the coronavirus outbreak. 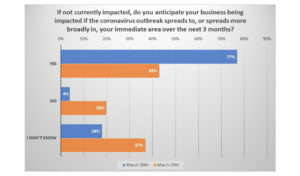 But a new survey released Monday found that three-quarters now said they have been negatively impacted by the COVID-19 crisis.

In the time between the initial survey, conducted March 10-11, and the new one, conducted March 20, several states have taken dramatic measures to try to cut down on coronavirus cases, including New Jersey’s shutdown of many retailers and services businesses.

(The firms that cited a positive impact are likely experiencing stronger sales due to demand for certain products, NFIB noted. And that may change as consumers feel more secure about their stockpiles of supplies.)

Joe Olivo, owner of a Perfect Communications, a commercial printing company in Moorestown, said he has seen an immediate 60-80% drop in revenue since last week, forcing him to reduce employee hours — cutting normal time 10% and eliminating overtime entirely. He also said he has been forced to contact lenders about his long-term debt that’s due this month, and is disappointed that the federal bill aimed at addressing the financial crisis has not yet passed.

Any lengthy delays in passage could force further reductions in hours, or even layoffs, he said.

Among the small businesses not currently impacted, 77% expect that to change over the next three months as the outbreak spreads. In the earlier survey, only 43% expected a negative impact ahead. Only 4% currently expect that they won’t be impacted if the outbreak escalates, with 18% unsure. Those numbers are also down, from 20% expecting no impact and 37% unsure, in the earlier survey. 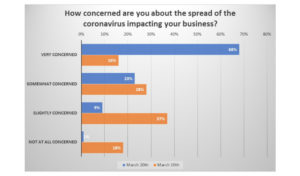 Slower sales were the No. 1 concern in both surveys, with 54% of negatively-impacted businesses in the current survey citing that problem, up from 42% in the prior survey. The No. 2 issue was supply chain disruption, at 23% in the current survey, down from 39% in the prior one. Sick employees were cited by less than 10% of respondents in both surveys.

Another New Jersey business owner, who did not wish to be named, said his plastics industry firm has faced numerous order cancellations, even though it is deemed “essential” because it serves industries including medical and pharmaceutical, as well as food and beverage.

Although he has not had to lay off employees yet, any further cancellations could lead to furloughs or cuts. And he said a shrinking workforce could jeopardize his ability to meet the critical needs in the sectors he serves.

Finally, only 6% of small business owners said they have taken no action to deal with the crisis, a radical departure from the 52% who had not yet taken action earlier this month.

The National Federation of Independent Business’ NFIB Research Center issued both reports, surveying firms across the country who are in its membership database of more than 300,000 small business owners.

Murphy won’t say when vaccines will be open to all, but...

AmeriHealth offering Narcan for free to some members