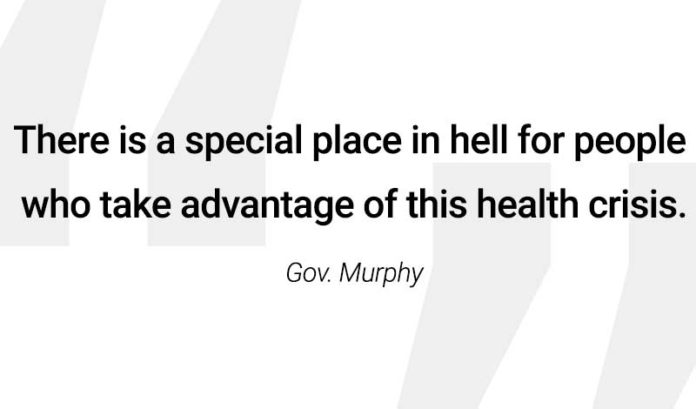 There was no indication of where they will go or when they will be built, but Murphy said Trump gave his OK during a brief phone call Monday morning.

Murphy and his administration have been meeting with the U.S. Army Corps of Engineers since last week.

“The president, to his credit, said he would support that,” Murphy said. “We are clearly going to need these field hospitals.”

Murphy, speaking at his daily coronavirus briefing, said he credited Trump for taking action. And for quickly returning his call.

“I want to give a shout out where credit is due,” Murphy said. “We put in a request for a call this morning and he called me back this morning. I have to say that turnaround, when you’re talking about the president of the United States, is meaningful.”

Murphy said he talked to Trump about more PPEs, a large block grant and the field hospitals.

During the governor’s briefing, Health Commissioner Judith Persichilli said the state may also begin the process of moving some patients to non-health care facilities, including hotels.

“Patients will be taken care of at the same level of care, it just may be at a different venue,” she said.

Murphy announced 935 more positive coronavirus cases, bringing the state total to 2,844. With the increase, New Jersey now ranks No. 2 among states with cases, trailing only New York. We are, clearly, the epicenter of the outbreak in the country.

The reasons for the increase are twofold: There is a growing community spread of the virus — and there is increased testing. Of the new cases, 128 are in Bergen County, which remains the heart of the outbreak. Other hot spots, for cases announced Monday: Essex (96), Monmouth (80), Union (66), Middlesex (61), Hudson (58) and Morris (55) counties.

Persichilli said there were seven more fatalities; bringing that total to 27. Those totals include five males and two females, ages 57-91. Two had preexisting conditions; one was associated with a long-term care facility. The fatalities were from the following counties: Bergen (2), Essex, Passaic, Somerset, Union and Warren.

(Read more on the numbers here.) 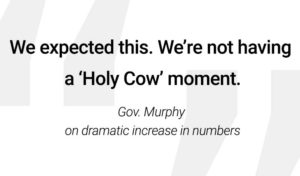 Murphy said the state is suspending all elective surgeries or evasive procedures, both medical and dental, effective 5 p.m. Friday. No operation that can be safely delayed by a patient’s doctor or dentist will be performed after this time, until further notice.

“We must take this step to lessen the burden on our health care system and preserve the Personal Protection Equipment gear that our medical responders need,” he said.

Murphy discussed more testing sites in the state, but he also suggested the day will come — likely sooner rather than later — that testing will be curtailed so the limited manpower and resources (including limited Personal Protection Equipment) can be used to care for cases, rather than diagnosing new cases.

Murphy noted there are more than 8,000 jobs — most in grocery, manufacturing and distribution — on the state’s COVID-19 web page.

Murphy said residents should expect schools to be closed for an extended period of time.

Attorney General Gurbir Grewal on businesses ignoring restrictions: “If you’re a retail store or entertainment store and you stay open, if you’re a bar and you keep serving patrons in your establishment, consider this your final warning. Your actions are against the law in New Jersey, and you will be held accountable.”

Murphy on those committing bad behavior now: “There is a special place in hell for the people who take advantage of this health crisis, whether you are price gouging or you view this as an excuse to pursue racist or bullying behavior.”

Murphy on the rise in numbers (he said the state’s been expecting them): “We’re not having a ‘Holy Cow’ moment.”