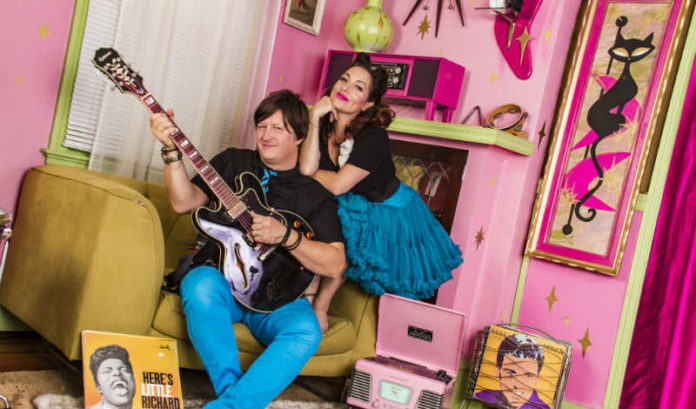 In Monmouth County, Chris and Jesse Apple own and operate Little Rockers, a music school for kids and their caretakers.

It is one of many businesses in New Jersey and across the country that has taken the step of transitioning to an online format amid the COVID-19 pandemic. And, for the Apples, the move to online has actually bolstered their business significantly.

For the past two years, the Apples have already been considering offering an online alternative to accompany their in-person classes at Little Rockers’ sites in Manalapan, Wall and Shrewsbury. And this recent crisis has been the catalyst for them to do so.

In an interview with ROI-NJ, Chris Apple detailed how he and his wife were able to not only transition effectively to online, but how they managed to increase the size of their classes.

“We just said, we’re gonna try to do a live stream of our class … and just see how it goes,” Apple said.

His setup was simple. He placed his iPhone on a stand and broadcast the class via the live streaming feature on YouTube. The first session was done as a test run, but, even then, the Apples managed to get several dozen people to tune in and watch.

“But, because the word spread so quickly, we ended up getting, on our best day, up to like 275 people tuning in to watch our class,” Apple said. “That was really amazing.”

Those tuning in aren’t just New Jersey residents, either. Apple noted how they have had viewers from across the country as well.

“We’ve had people from as far away as Florida, Delaware, Wisconsin, Michigan, all people that have friends and family from New Jersey who tipped them off that we were doing these classes.”

For now, Apple said Little Rockers is providing these online classes for free, since his clients have already paid for their in-person classes ahead of time, but come the spring session, he will offer a subscription-based payment method for clients.

Already, some viewers have been kind enough to donate a few hundred dollars to the Apples through PayPal, which is a sign that many viewers of his online stream could return as paying customers.

Apple said there was not much difficulty in setting up the initial live stream, but, now that the couple sees how successful this has become, they are currently working with Unreel, a video monetization company that specializes in creating subscription-based content for entertainment businesses.

The Apples plan on expanding their online format to be accessible on video streaming devices like Roku, Amazon FireTV, Apple TV and many others, with a weekly subscription that costs around $5.

And they plan to continue offering the online classes even after the pandemic dies down and they can reopen their brick-and-mortar locations.

Apple also expressed how, although there are some obstacles to the instruction aspect of this service — like not having eye contact or being able to allow the kids to physically interact with the instruments — he still ultimately believes this to be a very effective alternative.

“The pros are that it forced us to utilize our creativity to come up with different ways to keep our classes fresh. Kids actually are so accustomed nowadays to watching TV, watching their devices and watching screens that it’s kind of a no-brainer for them, as long as we’re there, doing our class and singing to them and interacting with the camera in a way that’s natural,” Apple states.

He even mentioned how he’s had dozens of parents respond very positively to the courses, sharing selfies of their kids playing along to the stream with their own instruments and just making the best of it.

Ultimately, Apple admitted that, even though Little Rockers has been able to find a lot of success with this transition, it is in part due to the fact that entertainment businesses are generally easier to transition from in-person to online.

Apple said that, for businesses trying to find an online alternative to their service, the best thing they can do is to find ways to utilize technology that is already present.