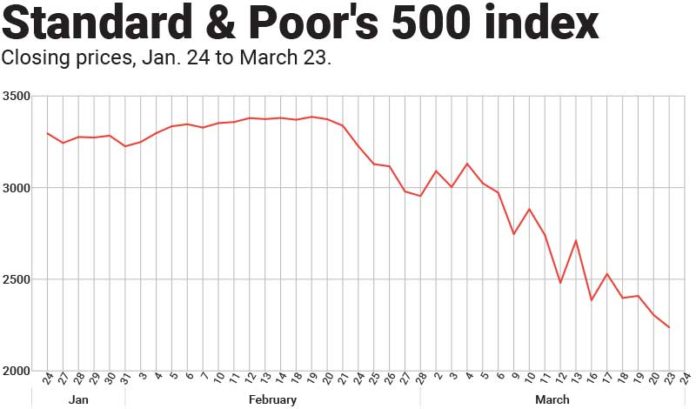 At the start of the year, Jim Ferrare of Withum Wealth did some comfortable prognosticating with ROI-NJ.

His calm assessment a few weeks into the calendar’s turn was that there was a tremendous enthusiasm for the stock market. But, after a decadelong bull run, he worried this year could be when the bear market showed itself. So, his take was that it was a good time to exercise caution.

Turns out he was right … even if no one could have predicted why.

Ferrare, managing principal of the unit of accounting and consulting firm Withum, now seems less serene — in fact, he seems to be finding scarcely enough hours in the day for the financial planning people are pleading for. They all want to know: The infectious coronavirus is dominating every aspect of life, so where does that leave us?

After one of the best 10-year stretches in the history of the stock market, a monthlong tumble shaved almost 40% of the value off the Standard & Poor’s 500 index, which measures the stock market performance of the nation’s largest publicly traded companies. In short, the bears have awoken.

Ferrare, obviously, wasn’t foretelling of a pullback the magnitude of which has only been recorded during the Great Depression. No one was. But, as a money manager prior to this historic drop, he was advising clients that they shouldn’t rush out to embrace the market.

“One of the basic concerns was the market was selling at unsustainable levels of valuation and there seemed to be a tremendous complacency,” he said. “In three or four short weeks, we’ve gone from an expensive market to one that’s hard to truly value. We don’t know when businesses will resume some sort of normalized activity and whether that will include social distancing.”

When may the market bottom out during a crisis like this? The truth is, no money manager has predictive powers that good.

As always, Ferrare warns that trying to time the financial markets is a losing proposition. But, if he had to weigh in, he has some optimism about the prospects of investing — even if incrementally — in equities right now.

“Some of these companies, the prices we’re seeing — when we look forward three to five years — will seem like incredible opportunities,” he said. “I’m confident that many blue-chip companies several years from now will be valued higher, if not significantly higher.”

A lot of the potential for economic downturn depends on how long-lasting and devastating the spread of coronavirus is, particularly in the U.S., which is several weeks behind the hard-hit Italy in terms of reported illnesses.

What measures the U.S. government decides are best to buoy the economy in the near-term will also be decisive, Ferrare said.

“The Federal Reserve, to their credit, is attacking this,” he said. “By announcing that they’ll be buying back unlimited Treasury bonds and mortgage-backed securities, they’re basically saying, ‘We’re going to do whatever it takes.’ That’s comforting, even if, as I tell clients, we can’t know when Congress will get their act together and pass a stimulus package.”

Assuming the worldwide coronavirus spread has already started the economy on a path to recession, financial planners are rooting for governments to intervene in a way that interrupts the sort of chain-reaction that led to the global financial crisis of about a decade ago.

For Ferrare, that means an awareness that, if Main Street businesses face significant financial troubles during a period of social distancing or more serious lockdown orders, they might get comfort from being told landlords can’t evict them; but, then, that landlord is going to go to the bank and say that they’re not getting rental income so their loan can’t be foreclosed on, he said.

And, just as it has become clear that the future may hold an unprecedented level of government intervention — it’s seeming likely that those guarantees of financial assistance are going to have qualifiers, perhaps including limits on CEO compensation or restrictions on stock repurchases.

“In part, that’s political, because we had Democratic primary candidates who were pushing for reform that was aimed at corporations — so, there’s a new backlash against, for example, corporate buybacks,” Ferrare said. “What I’ll say is this: I remember 1987 vividly, when that market sold off, and we started hearing day after day of IBM and other companies announcing a corporate buyback, it was like the Army coming to our rescue. We wanted to see them stepping up to the plate with cash. Now, it’s taboo.”

At the least, Ferrare expects companies are going to be mindful of the potential negative public relations associated with news of splashy buyback plans. Companies spending more on buying back their shares also played a minor role in the market’s rebound from the 2008 Great Recession, according to Ferrare.

“That means we’ll see a different playbook this time, which I’m mixed on,” he said. “It has been a help in the past, but, definitely, corporate buybacks have been abused throughout the years.”

In the end, financial planners can only control so much — namely, the wealth of the clients they represent.

“Recognizing everyone is a bit unique, staying the course right now might have merit for many,” Ferrare said. “For those that have a shorter time horizon in mind, that might not be the complete answer.”

As Ferrare works overtime to stay apprised of developments and help people understand what the implications there might be for their own financial picture, what’s surprising him is how level-headed many of his clients have remained throughout.

“I don’t know if it’s because they’ve been conditioned to these selloff events — from the dot-com crash to the Great Recession,” he said. “Or, maybe they’re just comfortable with the fact that they had a plan with a diversified portfolio. And we’ve preached diversification to our clients. So, in that sense, I generally feel pretty good — even if no one wants see clients losing money.”