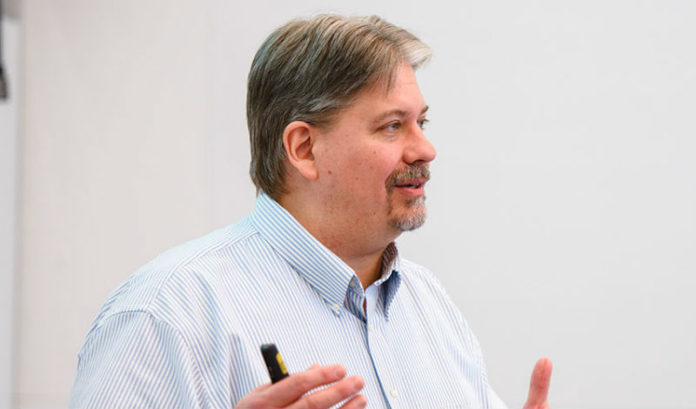 For New Jerseyans taking blood pressure medications, antibiotics and treatments for rheumatoid arthritis, the breakdown in supply chain management for medical ingredients produced in China is a scary thing to ponder.

Fortunately, it’s not as bad as some think.

At least that’s the view of Bill McLaury, a former pharma executive who is now an associate professor of professional practice at the Rutgers Business School.

McLaury, who specializes in supply chain management studies, particularly as it relates to pharmaceuticals, was executive director of pharma supply chain for 30 years at East Hanover-based Novartis before retiring in 2014 to become a professor. He said relying on third-party manufacturers of active ingredients in medicine is nothing new.

Because of the medical necessity of their products, large pharmaceutical companies such as Novartis have contingencies in place to cope with emergencies such as a tsunami or other acts of nature or terror, McLaury said. They are constantly looking at the supply sources they use for the ingredients needed for drugs they manufacture, categorizing them based on how critical they are or the impact they have on quality of life.

Well before COVID-19, and even before the recent tariffs were put in place by President Donald Trump, they kept a keen eye on how to replenish these vital ingredients when needed, McLaury said.

“A safety stock of the materials is already in place for times like these,” McLaury said.

Yes, even the unprecedented grip of coronavirus that the United States and the world is facing today.

“It’s safe to say they may have up to a year’s worth of active pharmaceutical ingredients,” he said.

Novartis and others, McLaury said, also have factories in various parts of the world with capacity to produce more drugs during times of deep hardship, “especially for any ingredients that are more at risk because they are coming from one source or one country,” he said.

“Not to sound crass, but when you are a $50 billion company, you better have contingencies and backup sources of supply to protect your business. I can tell you, back in late 2019/early 2020, when they first heard about the potential for this health crisis, they swung into action to determine what needed to be done.”

McLaury said he’s not a fan of Trump, but the president’s tariffs did end up benefiting the supply chain for companies, including drug manufacturers, “in a huge way,” because many companies opted to import materials sooner than they would have otherwise to avoid paying the higher tariffs.

Leading up to the dates when the tariffs took effect, and taking into account the Chinese New Year, companies likely accelerated their planned deliveries, which really helped their inventory, he said. By now, they probably converted at least half of the materials they brought in back in October or November into finished products.

McLaury did say consumers must be aware of a possible supply shortage.

“If the situation continues to get worse, and we’re still dealing with this six, nine, 12 months from now, you have to recognize that there is limited supply and even the contingency stocks will eventually run out,” he said.

McLaury said the Food and Drug Administration maintains a list of drugs in shortfall based on it talking to the pharmaceutical companies, and last month it issued a news release about how COVID-19 is affecting drug and medical manufacturing. It published a list of 20 drugs in short supply. All 20 are noncritical, McLaury said. The FDA doesn’t name them by name, he said, “but if you look at the list, with a little effort, you can deduce which ones” they’ve identified.

“You’ve been hearing a lot in the news about Plaquenil (brand name for zinc-based hydroxychloroquine) as a potential treatment for the COVID-19,” he said. “It’s a drug that’s already out there and is being used to treat malaria, lupus and rheumatoid arthritis. (One of the biggest human trials) is underway at University of Minnesota to determine if the drug can help COVID-19 patients and health care workers recover.”

McLaury said people should not be surprised if hydroxychloroquine shortages arise. Another drug that is susceptible to low supply is Losartan (or Cozaar), commonly used to treat high blood pressure.

“It’s a medicine that many are taking now and has been around a long time; and some say now that it could also treat COVID-19 patients,” he said. “I’m already hearing of customers who are unable to get refills.”

This is a case where one example of drug shortage does not equate to doomsday, McLaury said.

“Fortunately, with a lot of medicines, there are alternatives. If one is not available, another could be; however, some patients tolerate certain drugs better than others. Some people are allergic to penicillin, for example, and might not be able to switch to it if the antibiotic they are normally prescribed is in short supply. Fortunately, we have several antibiotic types at our disposal. It’s nice to have options.”

Paul Bergeron is a freelance business reporter based in Herndon, Virginia. And, yes, he is related to ROI-NJ Editor Tom Bergeron. They’re brothers. And, yes, if you saw the recent CNN spat: They get along better than the Cuomos.