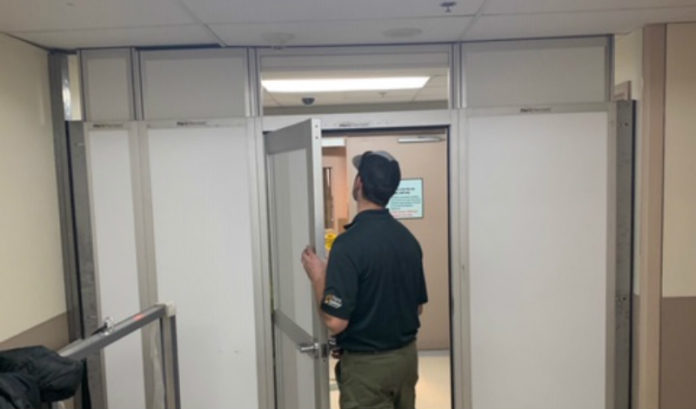 Herc Rentals didn’t know the biggest global health pandemic in a century was coming when it made the decision to diversify into the health care vertical more than a year ago.

The equipment rental company — a national player and one of the largest in a sector that’s traditionally split with hundreds of local mom-and-pop shops — was just looking to diversify.

“We wanted to be recession-resistant,” he said. “We started this initiative about a year ago. Health care and fixed facilities are two of the verticals we wanted to attack. Hospitals are consistently upgrading their facilities — and they’re always needing maintenance.

“We thought there was a lot of opportunity there.”

Herc is as busy as ever right now.

Hospital systems up and down the East Coast are using its air scrubbers — think of them as industrial air purifiers. Cowing rattles off a dozen, including RWJBarnabas Health, a few on Long Island, some in Massachusetts, Maryland and Virginia.

But, now, the company is getting more calls for its ability to quickly build rooms — or containment areas — within hospitals that have a higher level of sterilization and purification than one would normally expect.

Herc, using the STARC Wall containment system, can build an area within an emergency room or wing that hospitals can use to screen patients or quarantine them.

And it can be up quickly, Cowing said.

“One hundred linear feet of wall can be constructed in an hour,” he said.  “It not only has an adjustable size, but it has doors — either hinge or sliding doors.”

And it’s more than just the traditional sheetrock barrier you may see in a mall or an airport when it is building out a new space, Cowing said.

“It’s all airtight seals,” he said. “They’ll have negative air machines that will keep the air as clean as possible. It’s not going to stop everything. If someone comes in and coughs on you, it’s not going to stop that, but it’s going to keep all the air clean in that room. It will enable hospitals to build all the temporary rooms they need.

“When you’re talking about all the dormant wings that they are going to open, I think they’re going to need something like this.”

Herc already is installing some of the walls in facilities in Maryland.

Cowing said some of those hospitals are using the walls to divide operating and emergency rooms.

“We can literally turn them into 2-3 rooms,” he said. “You would be able to do construction on one side while the other side is 100% clean so it could be for rooms where people might need to be quarantined.

The company, which spun off from Hertz in the summer of 2016, still offers its traditional line of products: backhoes, lifts, lighting, generators and all the other equipment companies need for a project but don’t want to own.

It also was brought in to help the FEMA-assisted test site at the PNC Bank Arts Center in Holmdel.

“We don’t have tents, but we work with disaster tent companies,” he said. “Tent structures usually are 30×90 or 60×200. We’ll supply all the power for the site by creating outlets with power boxes, so people can power up laptops, fridges, fans, all the stuff inside the tent.

“We also have separate generators for climate. It’s heat now, but it can flip over to (air conditioning). And we have fuel containment, so, when the generator runs out, they have a fuel tank that’s right there — you don’t have to keep filling it up.”

Then there are the traffic control items: message boards and arrow boards for both inside facilities and out.

Cowing said the company just wants to help. It’s used to getting the call for snowstorms and other natural disasters. This, he said, is different.

“This is a health care emergency like we’ve never seen,” Cowing said. “Everyone has to do their part. If we can help hospitals with anything, we’re happy to do it.”