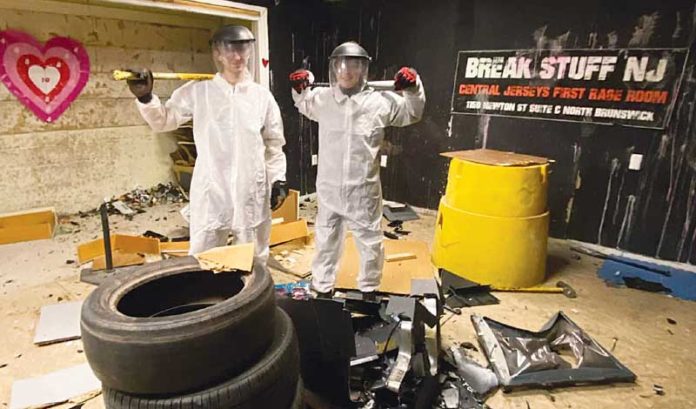 By day, Andrew Powers works as a taxpayer service representative for New Jersey’s Division of Taxation.

“I’ve always been in customer and public service, so I thought outside the box a bit in wanting to start a profitable business that could help people,” Powers said. “And there are a lot of angry people in New Jersey, especially after 2016. I don’t know if it was the election specifically, but it’s my sense that there is a different mood now in this country, in this state, and I think people really need an outlet.

Rage rooms, where people pay to smash everything from furniture to electronics without needing to clean up, are a growing international concept that just recently came to New Jersey (with Rage Room in Hackensack being the first).

“It’s awesome to see smiles on people’s faces and to feel the negative energy they came in with evaporate,” Powers, founder and owner, said.

Break Stuff NJ’s 550-square-foot room can accommodate parties of up to six over the age of 16 who want to climb into protective gear, listen to music and be incredibly destructive with weapons such as sledgehammers, bats and crowbars.

Six 20-minute sessions can be booked in advance for $25 each day — or less, if you are a teacher, first responder, mental health professional or in the military.

“They stick their necks out for us every day, so I want to help them with that extra stress and anxiety,” Powers said.

Though currently a one-man operation, Powers said the overhead costs are minimal and business is good, with the company now seeing upwards of 50 bookings each week.

“Within two weeks, we meet our rent and, after that, it’s mostly profit,” he said. “But the challenge has been in sourcing breakables. I’m always trying to keep a low-cost, diverse inventory of stuff to break. Though people love breaking glass bottles, and those, we can then recycle.”

Powers said he isn’t sure what the future holds in terms of expanding into more locations. However, he is considering moving into a larger warehouse nearby to be able to offer more rooms at the same.

And he isn’t afraid of a little competition.

“The more rage rooms become popular and successful, the better for us all,” he said.

Don’t worry, we taxidermied the watermelon, not the baby: How improv...