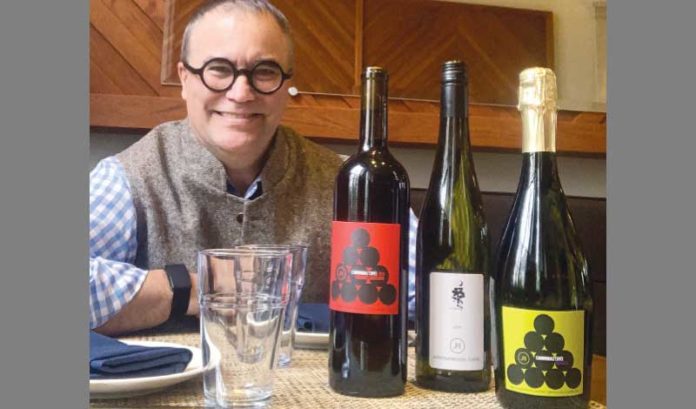 Chris Cannon, founder and owner of Jockey Hollow Bar & Kitchen in Morristown, said he has always wanted to sell private label wine at his establishment.

But now that he is, it’s not so private — and it’s not for profit.

“The whole point of Cannon Cru is for it to be a marketing tool for small businesses who can’t afford to market themselves,” Cannon said. “And nearly 80% of the profits will go toward combating climate change, which is another problem we have.”

Cannon previously was the owner of five fine dining restaurants in New York City, all of which earned three stars from The New York Times and a total of five Michelin stars. After more than three decades running New York City hot spots Judson Grill, L’Impero, Marea, Alto and Convivio, Cannon redeveloped and opened Jockey Hollow Bar & Kitchen in 2014 in the more than 15,000-square-foot, Italian palazzo-like Vail Mansion, which had sat abandoned for more than two decades in the heart of downtown Morristown.

“A large degree of what I do at Jockey Hollow is because I feel that, over my 58 years, I’ve watched the destruction of culture in real time,” Cannon said. “Everyone now just wants to streamline everything — you go into Manhattan, and the same stores are everywhere. All the small shops are going out of business.”

“In the more than three decades of my career, I’ve watched the most amazing explosion of awareness of food and wine ever in the U.S., and then, 15 years later, I’ve watched it all fall apart,” Cannon said. “The labor costs are high; there is so much pressure to push down pricing; and we’re competing not only with other restaurants, but also now grocery stores and direct-to-consumer prepared foods.”

Though Cannon has found success in the industry, he said he often comes across those who are struggling.

“For example, for the last couple of years, we’ve been pouring a rosé from a biodynamic producer, Domaine des Terres Vivantes, run by a young couple in Beaujolais, France, and it’s one of the best rosés I’ve ever had in my life,” he said. “But this past summer, the distributor came to us and said that they would like to sell the remaining inventory through the season, the last 20 cases, to us for $4 a bottle.

“On one hand, I thought, great, we’re getting this wine for cheap, but, on the other hand, I was really angry. What’s happening in the international markets with consolidation and the advertising power of big wineries is at the expense of amazing, quality wines made at small wineries run by people like this young couple.”

Cannon said he plans to help change that with his private label brand, Cannon Cru.

“Cannon Cru will source very small, extremely talented producers who need help in moving their product consistently, and who should be more well-respected,” he said. “I’m talking about wineries that are sustainable or organic, biodynamic, non-interventionist and respect terroir and tradition as well as businesses that respect the culture of wine and struggle in the current environment of international monopoly consolidation.”

The winemakers will also be featured on the back label, on Jockey Hollow’s website and in all of its marketing.

“I want it to be a win-win for all involved,” Cannon said.

Currently, Cannon Cru is sourcing a prosecco from Cima Di Conegliano, a Riesling from Weingut Eva Fricke and a cabernet from Ian Brand.

“For example, Ian Brand, a winemaker of the year according to the San Francisco Chronicle, is a young man in California who smartly sources from small, local family vineyards,” Cannon said. “And I’m also currently speaking with Seth Morgen Long, who I think is the most phenomenal producer of chardonnay in the U.S. right now, but he only makes 1,200 cases.

“He needs someone like me to come to him and say, ‘I’m committing next year to buy 150 cases and the following year 500 cases, and I’ll pay you up front for the product to market and sell it on my label while featuring you on both the bottle and my website because you are deserving of the recognition.’”

With Cannon Cru wines typically priced for retail at between $12 and $30, $1 from each glass poured at Jockey Hollow will go to the Coalition for Rainforest Nations, an intergovernmental organization of more than 50 rainforest nations around the world.

“In the restaurant business, that’s probably more than 80% of the profit margin, if we charge an average of $14 a bottle,” Cannon said.

Formed in 2005, the Coalition for Rainforest Nations partners directly with governments and communities to protect their rainforests from deforestation. The coalition is currently concentrating on implementing and increasing public and private funding for the Reducing Emissions from Deforestation and Forest Degradation mechanism, which, among other things, ensures that developing countries get paid if they can show they have been preventing deforestation, a huge source of greenhouse gas emissions and environmental degradation.

“At this point in my life, it’s not about the money,” Cannon said. “This is about doing something productive for society.”

Show & Tell: Will the novelty of video calls during the...