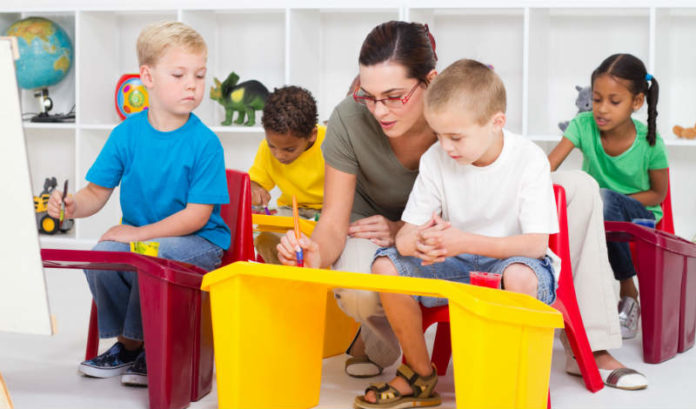 Child care centers in New Jersey will only be allowed to remain open if they certify that they will be used exclusively for the children of essential workers, especially health care workers and first responders, Gov. Phil Murphy announced Wednesday.

Caring for the children of the workers who are on the front line of the crisis is among the highest priorities, Murphy said.

Determining who will be eligible to use the day care centers still is being worked out, Murphy said, indicating it is one of the reasons for the delay of the start of the order.

“We’re still machining this,” he said. “It is, at a minimum, health care workers and first responders.”

Matt Platkin, the governor’s chief counsel, said the administration has identified six categories of those who will be included:

Defining those in the final category remains the biggest challenge.

The hospital at the Meadowlands Convention Center will be the first of four FEMA-assisted field hospitals to open. The state hopes it will be able to add 250 additional beds.

The Federal Emergency Management Agency field hospital at the New Jersey Convention and Exposition Center in Edison will come next, followed by one at the Atlantic City Convention Center. A fourth hospital, at a yet to be determined site, also will open.

State Police Superintendent Col. Pat Callahan said he expects it will take 7-10 days to open the facilities. He hopes the Meadowlands site is up by next week, while the others — which have not started to be built out — could be up in 2-3 weeks.

The sites are expected to bring 1,000 more beds combined. But Callahan noted the sites in Edison and Atlantic City may have the capacity to handle more than 250 beds.

Murphy said the state currently has 18,443 acute care beds, including 2,000 critical care beds. Murphy said to goal is to increase capacity by 2,360 over the next few weeks.

In addition to the field hospitals, Health Commissioner Judith Persichilli said an additional 800 beds will come on line at existing hospitals as they find more rooms available by opening closed wings, among other ways.

Persichilli said the need is become greater by the day in the northern counties.

“Right now, we’re starting to see some strain in the northern counties, particularly around critical care,” she said. “We’ve put out a call with the feds for 400 ventilators, we’re tracking with the hospitals up there. Critical care right now is pretty stressed.”

Murphy announced the federal government’s Health and Human Services Department is giving a grant of $1.9 million to 24 health care facilities in the state to help them deal with COVID-19 costs.

Murphy said he also is hopeful a multitrillion-dollar stimulus bill provides additional funds to help the government and businesses.

Murphy reports there are 736 new cases of coronavirus in the state, bringing the New Jersey total to 4,402.

In addition, there were 18 more fatalities, bringing that total to 62. The latest fatalities come from the following counties: Ocean (4), Essex (3), Monmouth (2) and Bergen, Burlington, Cumberland, Hudson, Middlesex, Morris, Passaic, Somerset and Union.

Health officials said they have results from approximately 14,000 tests. Of those, 4,402 cases have been positive, meaning 29% of tests are positive.

The state epidemiologist, Christina Tan, noted that those who did not test positive are not out of the woods. They could acquire coronavirus later — and their symptoms could indicate they have other respiratory issues, such as the flu.

Murphy said Essex County will open a facility Thursday. It will be by appointment and for county residents only. Go to www.Essexcovid.org for more information.

Murphy also said Merck CEO Ken Frazier announced his company will be contributing 300,000 masks to the cause and that Richard Tolson, the director of the Bricklayers and Allied Craftworkers Administrative District Council of New Jersey, is leading a donation of equipment to Burlington County health care workers.

Murphy said the state’s donation email line, ppedonations@njsp.org, has received more than 550 emails from those looking to help.

Murphy announced there were two summonses given out in Lakewood for crowds; one was for an in-house wedding. He also said a man in New Providence was given additional charges when he said he had coronavirus and attempted to cough on health care workers and the police at the scene of an arrest.

Murphy said the state is serious about enforcing the stay-at-home order.

“We mean business,” he said. “We take no joy to say there are ‘no gatherings.’”