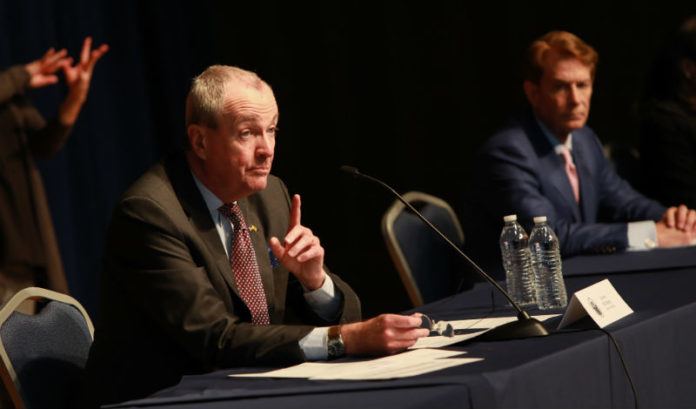 In a long-expected milestone the state never really wanted to reach, Gov. Phil Murphy announced Saturday that New Jersey now has more than 10,000 cases of COVID-19.

Murphy announced during his daily coronavirus briefing that there were 2,289 new coronavirus cases, bringing the overall total to 11,124. The number of positive results continues a recent surge in cases — the state had fewer than 1,000 cases on March 20, just eight days ago. Murphy, however, said it is not all bad news.

“It allows (our health care leaders) the data they need to much more aggressively and thoroughly deal with this,” he said. 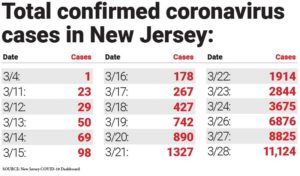 Murphy said the increase is coming from both community spread and the explosion in test sites — there are now more than two dozen in the state. But, it should be noted that only 160 of the new positives came from the massive FEMA-assisted testing sites. Those sites, open for a week, have produced just 662 of the positive results.

Health Commissioner Judith Persichilli said the state’s rate of positive tests remains about one in three, at 34.99%. Murphy said that number may be higher than other states’ because of New Jersey’s strict insistence to only test those showing symptoms.

Bergen County continues to be the epicenter of the outbreak in the state. It had 250 of the positive results reported Saturday, followed by Essex (197), Hudson (155), Union (132), Middlesex (126) and Monmouth (122) counties. It must be noted that 982 of the cases’ county has not been identified.

If Bergen were a state unto itself, it would have the 12th-highest number of cases in the country, just behind the entire state of Ohio, according to CNN tabulations. Essex County would be 17th overall.

Other news and notes from the briefing: 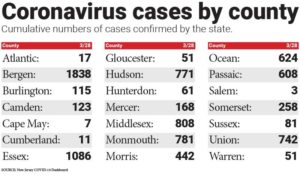 Murphy announced there were 32 more fatalities, bringing that total to 140. Of those fatalities, 20 were male and 12 were female. The age range was between 30-100. And none of the deaths was associated with long-term care facility.

Counties of the latest fatalities: Bergen and Union (7), Middlesex (5), Morris (3), Essex, Passaic and Hudson (2) and Ocean, Somerset, Sussex and Warren (1).

Persichilli said the need for all items is growing, especially in North Jersey. She said an advisory group has begun discussing the concept of co-venting, where one ventilator can be used for two people. It’s a process that has been approved, but has not yet been put into place.

Because of the shortage, Murphy has issued an executive order that all health care facilities — including licensed acute care hospitals, long-term care facilities and temporary medical facilities — must report to the Department of Health and the Office of Emergency Management data concerning their capacity and supplies, including bed capacity, ventilators and PPE, on a daily basis.

“This will allow us to more efficiently and effectively manage the flow of PPE,” Murphy said.

The state received inventory from 3,700 now temporarily closed health care facilities (those doing elective surgeries) but has not processed what amount of PPEs may be there.

The state also continues to accept donations at covid19.nj.gov/donations.

Murphy said he knows nothing of a suggested quarantine restricting movement of everyone in the tri-state area.

“There’s no question the New York metropolitan area is the No. 1 hot spot in America right now,” he said. “Until further notified, we’re going to keep doing exactly what we’re doing.”

“Do we consider regularly taking additional steps? You bet,” he said. “Either prompted by the president or on our own. “

Murphy urged residents to fill out the U.S. Census during the stay-at-home edict — saying it is a big issue in times of crisis. Fill out the form here.

“We know we were undercounted in 2010, and, because of that, we are, right now, leaving critical federal aid on the table,” he said. “Census is not just a number, it’s how we, as a state, qualify for tens of billions of dollars in federal funds. And, right now, we need every penny, more than ever.”

Murphy said there continues to be a small number of people who do not get it, citing a party police broke up Friday night in Ewing Township that had 47 people (including a DJ) in a 550-square-foot apartment.

“Here’s an example of what not to do — and we are not going to be shy about naming and shaming those who just can’t get this message into their heads,” he said. “The organizer was charged, as they should have been and deserved to be. This is not a game.”