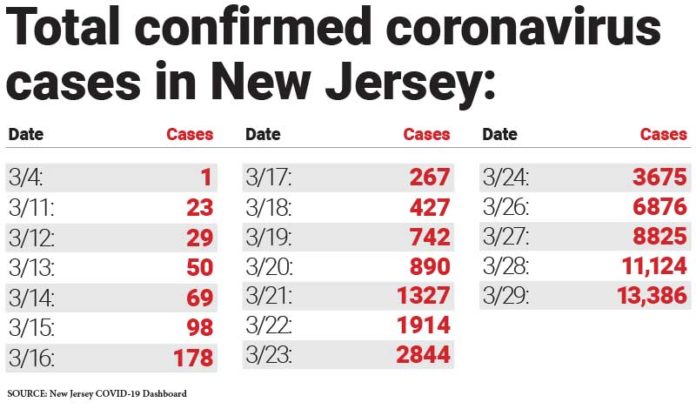 Murphy also announced there were 21 more fatalities, bringing that total to 161.

Sunday marked the first time that Murphy has not done a daily coronavirus briefing. The numbers were announced on the state’s website and by Murphy on his Twitter account.

The state has yet to determine the county for 3,020 confirmed cases. That total alone would rank as the 11th highest state in the country, according to CNN’s state-by-state totals.

Late Saturday night, Murphy responded to the Centers for Disease Control and Prevention travel advisory that encouraged residents of the tri-state area to voluntarily forgo any domestic travel for 14 days. The recommendation is less than the mandatory 14-day stay-in-the-region request some felt may be coming.

Murphy’s statement: “Throughout the day, I’ve been in constant communication with the White House, including discussions with the president and vice president, who briefed me on tonight’s CDC travel advisory affecting the tri-state region.

“To be clear, this nonbinding advisory guidance does not change the rules that have been established and in place for over a week now under Executive Order 107. If you have been working as part of our frontline response effort, from health care workers to supermarket workers, we still need you on the job.

“I encourage all New Jerseyans to continue practicing aggressive social distancing and take personal responsibility to help us get through this public health emergency.”

“The fact of the matter is, we’re already doing that. We’re telling people, ‘Don’t go anywhere.’” — Murphy, regarding the recommended travel ban, during interview with WBLS-FM 107.5.