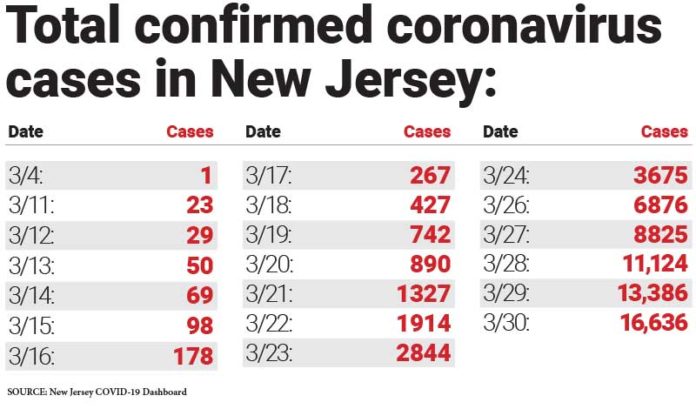 Gov. Phil Murphy announced Monday the state had 3,347 new COVID-19 cases, a record total so far in the outbreak in New Jersey. The new cases increase the state’s total to 16,636.

Murphy also announced there were 37 additional fatalities, bringing the state’s total to 198.

The 3,347 total new cases are more than a thousand cases more than have been announced on any previous day.

Other notes from the briefing, which is still ongoing.

“We are incredibly grateful for their selflessness and patriotism,” he said.

To volunteer, go to covid19.nj.gov/volunteer.

Murphy announced the state has received 300 more ventilators coming from the federal government — but continues to stress to federal officials that the state needs more. Murphy said the state has requested 2,300.

“This is real life,” he said. “This is life and death. We need more ventilators — and I will continue to say these four words in every phone call I have with the president and the administration until, God willing, we get them.”

Murphy repeated the call for donations at covid19.nj.gov/ppedonations.

Murphy said Sherwin-Williams announced it will be donating an additional 2,500 N95 masks and 1,000 gloves.

Murphy said residents may anonymously report any instance of unlawful hoarding of medical supplies and price gouging to 866-720-5721 or disaster@leo.gov.

Murphy announced clarifications on businesses, announcing that auto dealers can have online sales only, Realtors can show houses in a one-on-one situation (no open houses), golf courses continue to remain closed, but gun shops will reopen.

State Police Superintendent Col. Pat Callahan clarified the number of law enforcement impacted by coronavirus. Callahan said 288 law enforcement officers have tested positive, 2,477 are self-quarantining and 618 are out for other reasons.

Callahan said there have been 70 compliance issues resulting to 34 indictable offenses. Some of the latest over the weekend included another party in Lakewood.

Murphy said he is growing increasingly frustrated by those who knowingly break the rules and said he is hoping for steep penalties. “I want to tighten the screws,” he said.

Murphy also said he’s running out of patience for those who claim ignorance in spite of all the state’s announcements. “The patience for ignorance is about zero,” he said.

Murphy said the state is not considering allowing gas stations to allow self-service: “We have given no thought to changing that,” he said.

How to help millennials figure out health plans? Ask them