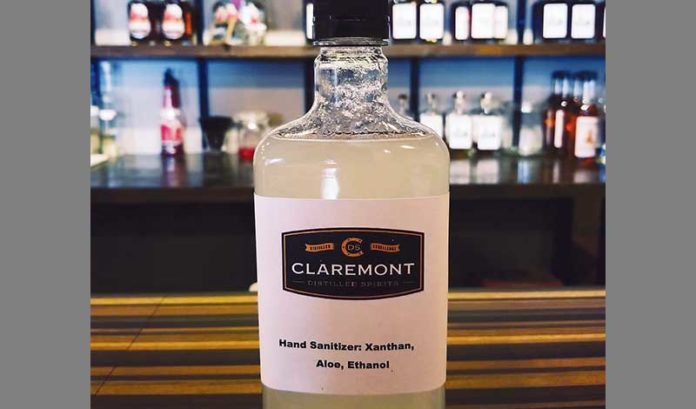 Somewhere near 1,000 calls a day echo through the Fairfield offices of Claremont Distilled Spirits.

“And it’s a little shocking to pick up the phone and have someone in Louisiana asking for a bottle,” Koether said.

It’s not wild drinking sprees that people are thirsting for. The bottles people want might contain alcohol, but it’s hand sanitizer they’re after.

After reports that Claremont Distilled Spirits, which has the largest production capacity of any New Jersey distillery, stopped producing liquor to make hand sanitizer by the gallon, the company started experiencing firsthand how in-demand it is during the coronavirus outbreak.

Koether, after hearing that even first responders were in short supply, decided to have the company he leads as CEO become one of the country’s craft distilleries that have pivoted overnight from brewing spirits to making a product that is being stockpiled by consumers everywhere.

High-proof alcohol being one of the main ingredients made it a relatively uncomplicated switch. The recipe also calls for aloe vera juice and other thickening agents to make it easier when applied to skin. The company actually has a biochemist on staff, who helped in getting the formulation right.

In coordination with the FBI, the company has been handing out the solution mostly to firefighters, police and rescue squads through the Office of Emergency Management departments of various counties. The business is not charging anything for it.

“I’m personally a little uncomfortable trying to profit on this,” Koether said. “We’ve been asked by other businesses whether we want to partner to make this a profit-producing endeavor. That’s not the motivation. And as long as I can pay rent and pay employees, I’ll be happy.”

Any alcohol can be expensive to produce, he added. The company is asking for donations, but, between the cost of materials and paying his workers, Koether isn’t sure how long the distillery can continue its current production.

“It’s the great unknown,” he said. “We can sustain for some period of time. But, after a month or so, it could end up becoming an issue.”

Somewhere down the line, Koether admits he might be forced to consider putting a price on the hand sanitizer the company is making.

As far as making the liquor it’s known for — there’s none of that going on. Koether said the business hasn’t filled an order in a week. He doesn’t expect that to change soon.

He knows the impact on his bottom line will be painful.

“But I honestly don’t even know how significant it will be, because we’re not canvassing accounts right now,” he said. “Liquor store owners really don’t want salespeople around because they’re understandably trying to minimize contact with people. But bars and restaurants — that’s probably 20-30% of our business.”

For now, Koether and his team remain in good spirits — even if they’re working 18-plus hour days and sleeping in cars and on couches to get first responders the protection they need.

“We’re all going a little crazy, but having some fun, too — believe it or not,” Koether said. “The great thing about being a distillery is you don’t run out of alcohol. So once work is done at the end of the day, we can enjoy a cocktail or two.”

CPTC, with EDA’s help, buys building it had been leasing