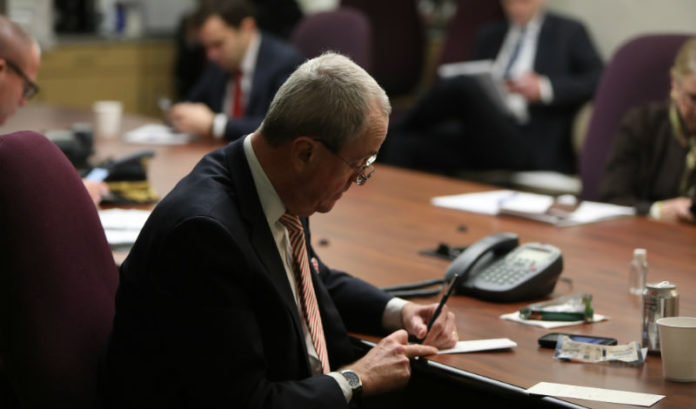 The governor noted the state has now received 850 ventilators from the national stockpile. Despite this, Murphy said he is continuing to ask for more. He said the state’s current ask is for 1,650 more ventilators.

Murphy, speaking at his daily COVID-19 briefing Wednesday, also said the state has procured nearly 10 million pieces of Personal Protective Equipment on its own since the crisis began.

Murphy said it will cost the state in the tens of millions of dollars, but that it is worth every penny to ensure the safety of health care workers and potentially save lives.

Murphy and Health Commissioner Judith Persichilli said the state is “OK” on both ventilators and PPEs for now, but they both said they know that situation can change daily.

The governor was adamant the state needs more long term.

“Right now, as we look out … Do we have enough ventilators? No.

“Do we have enough PPEs? No.

“Do we have enough beds? No.

“Do we have enough health care workers? No.

“Do we have a plan for all of this? Yes. But we need a lot of things to go right across all four of those dimensions. But we are not where we need to be or where we’ll have to be.”

Other items discussed at the daily briefing include:

Murphy said he, state Senate President Steve Sweeney (D-West Deptford) and Assembly Speaker Craig Coughlin (D-Woodbridge) agreed to move the deadline for filing state taxes back to July 15 and to move the end of the fiscal year to Sept. 30.

“We are taking this unprecedented step for a couple of reasons,” he said. “The first, is the necessity to have all hands on deck to see us through this emergency. We simply do not have the luxury of time. We must all be focused on our need to see our state, and our people, through this emergency, and to ensure that our immediate needs are met.

“The second reason is more pragmatic —we must enact a fiscally responsible budget. There is simply too much economic and fiscal uncertainty at this time. We will need a little time to emerge from this emergency and take full stock of the pace of our economic recovery, so we can make smart decisions and enact a well-informed budget.”

Murphy has continually emphasized that the state is only testing those with symptoms. He said that may change for one group.

Murphy said the state is still trying to find a mandate for renters, noting he had a meeting on it earlier in the day. The situation is complicated, as it is a different relationship than mortgage holders have.

Murphy, however, reiterated the idea that landlords who have benefited from state and federal relaxation of mortgage payments should pass that relief on to their tenants.

Newark is continuing its zero-tolerance policy. State Police Superintendent Col. Pat Callahan said there were 131 incidents, resulting in 125 summonses and the closure of five businesses.

Murphy continued to thank the business community for its contributions to the cause. Wednesday, he specifically acknowledged the New Jersey Devils and FirstEnergy, both of which he said have made large financial contributions.

Murphy said he is not planning to make an endorsement for president, as of now. He also indicated he is spending almost no time in his role as head of the Democratic Governors’ Association.

Murphy said he has not been asked, but he assumes the Democratic National Convention, scheduled for July 13-16 in Milwaukee, could be delayed or adjusted in some fashion.

“I don’t know that there was any state in America that was on this before we were.” — Murphy, on the idea New Jersey was late to dealing with COVID-19. He even broke out an old, familiar phrase. “The facts don’t support that. Period. Full Stop,” he said.

What do employers have to know about employee leave, income rights...