Health Commissioner Judith Persichilli said Wednesday that North Jersey is beginning to experience the surge the state has been expecting.

“Community spread is here in New Jersey, and it’s here to stay for a while,” she said.

The numbers bear it out: Gov. Phil Murphy announced there were 3,649 new coronavirus cases in the state Wednesday — a new one-day record — bringing the state total to 22,255.

In addition, Murphy announced there are 91 more fatalities, bringing that fast-growing state total to 355. The state has announced 194 COVID-19 deaths since Monday. 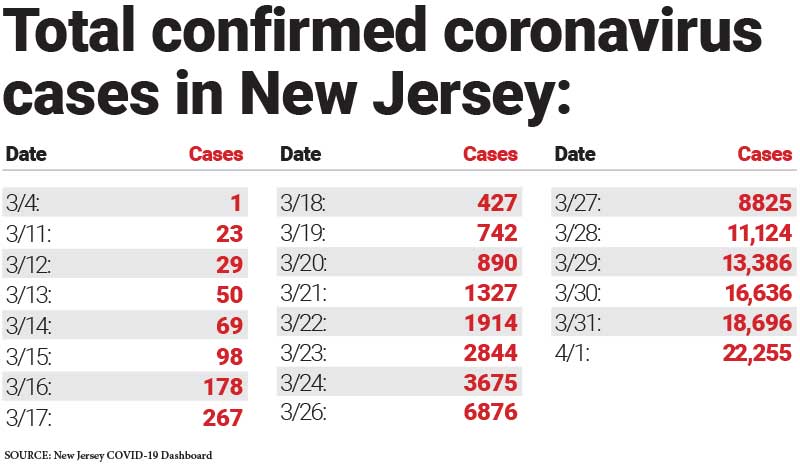 Many of the fatalities announced Wednesday are from northern counties: Bergen (with 23), Essex (22) and Hudson (13).

The fatalities overall still lean toward the older population. Persichilli said 47% of all fatalities are people over the age of 80 — and 39% of that group had pre-existing conditions.

Persichilli said the social distancing steps the state has taken are holding off a surge, but said it is getting tougher.

“In the northern part of the state, we’re beginning to feel the real stress and strain on the critical care complement,” Persichilli said.

Persichilli said Tuesday night that seven hospitals in northern counties reported they were on divert status. She said some of that was due to overcrowding in the ER.

Persichilli said hospitals go on divert for two reasons: Hospitals either do not have the workforce to take care of patients, or the capacity. Persichilli said divert status potentially can be removed in a matter of hours, as situations change.

Murphy said the need for help is one of the reasons he signed an executive order, authorizing additional flexibility and protections for hospitals and front-line health care responders.

Murphy said the order removes bureaucratic roadblocks so the state can more quickly bring more health care practitioners into its effort — those could be retired health care worker or those licensed in other states or countries.

The order also waives scope-of-practice requirements for advanced-practice nurses and physician assistants, who are already being called upon to shoulder extraordinary burdens.

More, he said, the order makes clear that the health care professionals who we are calling upon to help in the state’s COVID-19 response will be immune from civil liability for actions taken in good faith.

Murphy said the field hospital that is being prepared at the Meadowlands Convention Center will be opened next week. He intends to visit the facility Thursday.

The northern counties also had the majority of new cases: Bergen (338), Essex (277) and Hudson (200). But, it must be noted, Wednesday’s announcement included a growing number of cases in South Jersey.