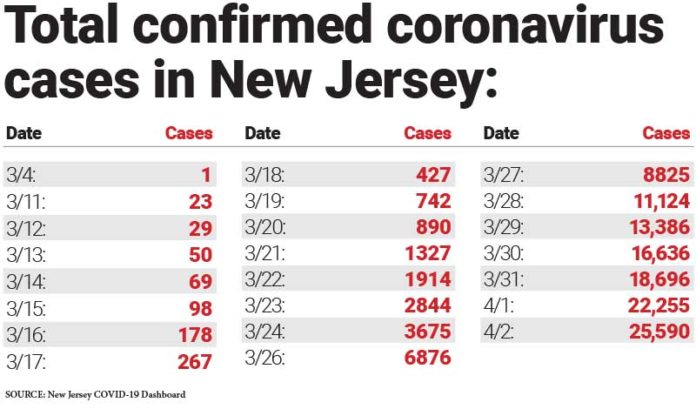 New Jersey hit two more milestones Thursday — neither of which it wanted to reach. Both, however, were expected.

Murphy noted the fatalities number may have jumped due to increased ways the count is made. In addition, Murphy said the announcement of fatalities does not necessarily come in real time.

Here are additional news and notes from Thursday’s briefing:

Murphy took a tour of the field hospital at the Meadowlands Convention Center in Secaucus on Thursday morning, along with U.S. Sens. Bob Menendez and Cory Booker (both D-N.J.). The hospital, which will begin taking patients Monday, is scheduled to be able to handle 250 patients, but Murphy hinted there could be more.

The patients, in theory, will not have COVID-19, but Health Commissioner Judith Persichilli said the staff will be able to handle such patients, which inevitably will surface. The site will be serviced primarily by health care workers who have signed up to volunteer.

Murphy announced he has signed an executive order formally authorizing State Police Superintendent Col. Pat Callahan to commandeer medical supplies and equipment that are necessary for the COVID-19 response from health care facilities. Murphy is hoping all such sites will volunteer such equipment, but notes Callahan now has greater authority to obtain it.

Murphy said he is concerned by reports that the federal stockpile of ventilators and Personal Protective Equipment is running low. Callahan, responding to reports that some of the ventilators are not in working order, said that has not been his experience.

Murphy announced Horizon Blue Cross Blue Shield of New Jersey has committed to donating a total of 500,000 N95 masks and 81,000 face shields. He said it is a donation of more than $2.3 million worth of supplies.

Murphy also said Horizon is making both a $100,000 donation to the Community Food Bank of New Jersey and $60,000 to the Jewish Family Service of Atlantic and Cape May.

Murphy said Mercer County is now operating an appointment-only, drive-up testing site at the Quaker Bridge Mall in Lawrence Township for county residents. This site is open weekdays from 8 a.m. to 4 p.m. You must have a doctor’s note to receive an appointment.

A complete list of all the testing sites in the state can be found at covid19.nj.gov/testing.

Attorney General Gurbir Grewal is now making public the name of individuals who have been criminally charged for assaulting law enforcement officers by spitting or coughing on them while claiming to have COVID-19, Murphy said. The charge has been updated from disorderly conduct to assault.

“Let me be clear — we are taking a zero-tolerance policy against anyone who acts so stupidly and puts others in danger or makes them fear for their health,” Murphy said. “These are not slaps on the wrist either. If you engage in such reckless behavior, you’re going to face —at the least — fines of up to $10,000 and up to 18 months in jail.”

Murphy referred to the first six charged as members as of “Knucklehead Row.”

Department of Children and Families Commissioner Christine Norbut Beyer said the reported cases of child abuse and neglect are down year to year in March.

Norbut Beyer and Murphy said they believe that number does not indicate abuse/neglect cases are down, but rather that these children are not being seen — and identified — by teachers, coaches and others in society.

Murphy and Norbut Beyer encouraged everyone to offer to lend a helping hand to those watching children in these stressful times.