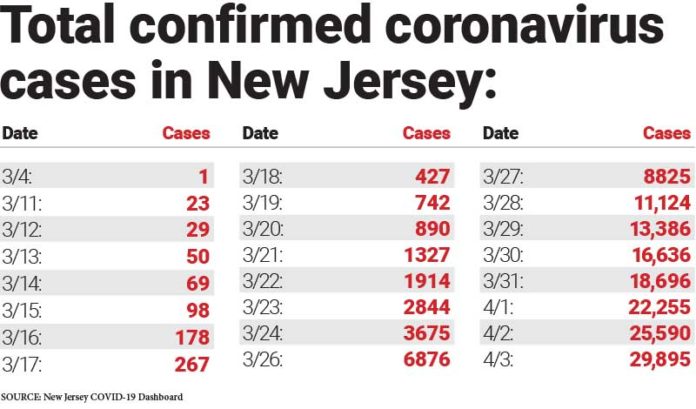 Gov. Phil Murphy ordered Friday that all U.S. and New Jersey flags be flown at half-staff at all state buildings and facilities indefinitely, effective immediately, in recognition and mourning of all those who have lost their lives and been affected by COVID-19.

“This is one of the greatest tragedies to ever hit our state, and our nation,” he said. “We must have a constant and visible memorial of the tremendous personal toll COVID-19 is having on our communities.

“And, since families, at this time, cannot hold funerals for their lost loved ones, this is a way we can make sure their loss is not forgotten.”

Murphy made the remarks during his daily COVID-19 briefing — and after he announced a new single-day record of new cases at 4,327, the first time the state has had more than 4,000 new cases.

In addition, Murphy said there are 113 more fatalities, bringing overall fatality total to 646.

Murphy stressed that the numbers do not necessarily mean there are 113 additional deaths in past 24 hours, saying the gathering of deaths is not necessarily in real time.

Persichilli said 3,016 individuals who have tested positive are in hospitals. Of that total, 1,227 (or 41%) are on ventilators.

Persichilli said the percentage is lower than she expected and that she felt that it indicated people are coming into the hospital sooner rather than later. She called it a percentage they can work with.

Persichilli said the positivity rate of testing is 41.99%, up just a touch from the day before.

Murphy again reiterated the idea that he is not opposed to masks, but that he is not going to recommend that everyone wear one — as other areas are starting to do. He also, again, stressed that masks can bring a false sense of security and are not a replacement for social distancing.

“Yes, you can wear a bandana or a scarf or a simple cloth face covering when you’re out, there’s nothing wrong with that,” he said. “But that is not in any way a replacement for social distancing in terms of flattening the curve. Again, if you want to go ahead and do it, no issue.

“But don’t assume that that makes you Superman or Superwoman and that you can ignore the social distancing that we are pounding the table on. Minimum 6 feet from anybody else at all times.”

Murphy indicated the state likely will move the date of the primary election, currently set at June 2. He said the delay in holding the Democratic National Convention gave the state more room to act.

Murphy asked for state residents to be patient when dealing with the Department of Labor & Workforce Development for unemployment benefits, saying the department has been handling volumes many tens of times greater than usual. Murphy said more than 33,000 claims were processed Thursday.

He also reminded residents that all benefits will be paid in full, regardless of when they are processed.

Murphy gave updates on the state’s job website at jobs.Covid19.nj.gov. There are now 44,000 job listings from 540-plus employers. Murphy said the site has been visited more than 1 million times and been accessed by more than 410,000 unique users.

Murphy said the state’s website, COVID19.nj.gov, has an “Ask a Scientist” feature, where questions can be answered.

“We know there are some questions that don’t have a catch-all answer,” he said. “So, the Office of Innovation, in partnership with the Federation of American Scientists, has put on the site the ability for you to submit a question directly to an expert, who will email you back an answer.”

Murphy said UBS donated an additional 10,000 N95 masks — on top of its previous contributions. Murphy also made reference to an “enormous lift” from Apple.

Cumberland County has brought a testing site online for its residents at the Vineland campus of Rowan College Cumberland. This site is being run as a partnership between Cumberland County and the CompleteCare Health Network. It is open by appointment only, and you must obtain authorization for a test. Go to www.CompleteCareNJ.org and click “Request an Appointment.”

In Essex County, the drive-through facility for county residents at Weequahic Park will be providing tests next Monday, Wednesday and Friday (April 6, 8 and 10). Screenings are by appointment only for Essex County residents who are symptomatic. For more information, visit www.essexcovid.org.

Murphy on how people should act: “Behave as though you’ve got it.”