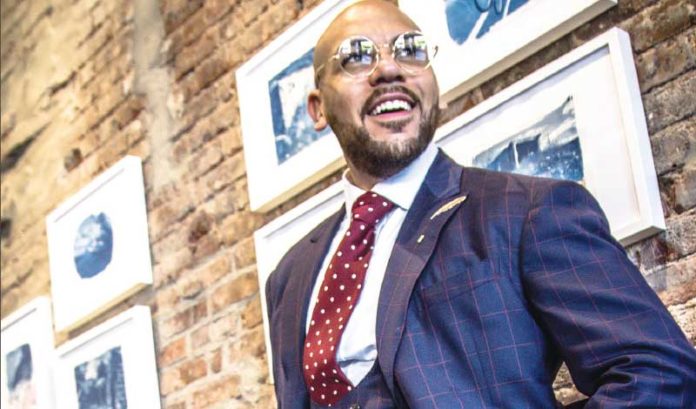 In about a decade, the entrepreneur who goes by the sole name Medina has gone from just wanting to establish himself in Newark by launching a modest boutique design agency … to being the city’s unofficial United Nations secretary-general.

Or, at least, that’s what he says overseeing the mix of black, brown and other up-and-coming minority entrepreneurs that move through Newark coworking hub =SPACE reminds him of today.

“We’ve got people from all beautiful backgrounds,” he said. “Even when you open the elevator, it’s just this place of feeling welcome; you should feel inducted into this culture and community. … I find that’s often the missing link in other coworking spaces.”

It was about five years ago — and five years into Medina coming to the Brick City from Brooklyn to start his small design firm, Medina=Citi — that he and co-founders Sean Hairston and Rafael Roman identified a need for a shared workspace that catered to entrepreneurs from multicultural backgrounds.

Since then, co-working spaces have become increasingly relevant as a trend in the business community — and they’re only gaining more traction. Memberships at these spaces are expected to double to more than a million by 2022, according to the Global Coworking Unconference Conference.

In the interim, =SPACE has remained one of the few regional entities with an emphasis not just on providing a place for women-owned startups, but for business owners of color as well as LGBTQA individuals.

As a testament to that being something that entrepreneurs are actually demanding, Medina said the coworking space has operated at either full or nearly full capacity for years. As a result, the business at the end of last year added to a second story and doubled its size to 12,000 square feet total at 89 Market St. in Newark, bringing together two campuses run in separate locations.

The expansion represents the opportunity for the space to be a larger venue for the events sometimes held at the space by organizations such as the Port Authority of New York and New Jersey, which holds a permanent residence at the =SPACE offices.

Through a partnership with RBH Group, the now-consolidated center has an expanded suite of tools for multimedia entrepreneurs, including dedicated studios for recording podcasts. Newark Mayor Ras Baraka is a notable regular there. He records his own podcast, “Ras in 60,” in one of the studios.

In fact, the success of the center has been such that Medina is dreaming as big as the entrepreneurs his center supports.

“What I’m seeing the future as is finding an investment partner that will allow us to grow a state-of-the-art facility in Newark, of course, but also across the country,” Medina said. “I think there are cities just like Newark that could use an (=SPACE) to help their small businesses, startups and tech community grow.”

What Medina believes this approach to designing a coworking facility addresses is one of the most pernicious obstacles facing black and brown entrepreneurs: a lack of information on where to start and how to gain traction.

That’s to say nothing of the more tangible hurdles faced by those entrepreneurs, which Medina elaborated on.

“Women of color are just statistically so talent-rich, yet they receive less than 0.2% of investment capital, black women especially,” he said. “That might as well be 0%, but they’re able to generate about $52 billion in profit with that 0.2% investment. They’re able to take their dollar farther. It makes me so proud at how resilient and resourceful these women ventures are.”

The coworking space is the helping hand writ large that had already existed in Newark.

“We really started with having people on our (Medina=Citi) design team help coach people on what you need in order to understand profit and loss,” he said. “Or, hey, if your product costs this much, this is how much you should charge in order to eke out a profit. It was very informal — just a community helping each other.”

Medina and his =SPACE co-founders are responsible for making it formal — even if he never from the start intended to become a Brick City ambassador.

“All of a sudden, I’ve become this advocate in the city for entrepreneurship and tech culture from a multicultural perspective,” he said. “And I’m really privileged to be called on to represent my community that way.”

2 big summer festivals are back (and looking for sponsors)