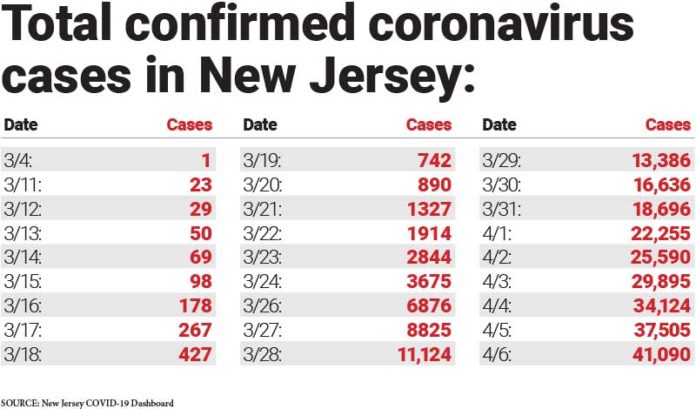 The number of COVID-19 fatalities in New Jersey topped 1,000 on Monday — yet another reminder of just how powerful and far-reaching this pandemic has become.

But it is the fatalities total that is moving to the forefront of our consciousness now. It’s the number that forces everyone to take COVID-19 — and the social distancing needed to combat it — more seriously.

Murphy said the milestone may be difficult to hear.

“I know hearing these numbers can be scary,” he said. “Seeing the faces we have lost makes this all the more real for each of us. But, we cannot give in to fear or sadness — and we must resolve to continue our fight, together, to crack the back of this crisis and flatten the curve, so we have fewer and fewer lives lost and friends to mourn.”

Murphy certainly has noted the significance connected to milestones.

On Saturday, he solemnly announced that the number of deaths was now greater than those New Jersey suffered during 9/11 — pausing for a moment of silence while doing so.

The reality is, such milestones will keep happening.

The state already has passed the number of New Jerseyans who died in the Korean War (836) and conceivably could top the number who perished in Vietnam (1,487) by the end of the week.

Next up is World War I, when approximately 3,400 New Jerseyans are believed to have died. That’s a total New York state passed this weekend. Only one other state, Michigan, has more than 500 fatalities, according to CNN’s state-by-state tracker. Louisiana, however, could be there by the end of Monday, too.

It’s too soon to speculate if the fatalities from the pandemic could reach the total number of New Jerseyans who died in World War II, believed to be 10,372.

The death toll continues to strike certain populations — mainly those who are older and had an underlying health condition. And, of that group, more males than females.

On Saturday, Health Commissioner Judith Persichilli gave a statistical breakdown of the fatalities.

The age breakdown of the first 846 fatalities:

Persichilli said more than half of the 846 fatalities were under investigation, but, to this point, the state had only four fatalities in which there were no underlying conditions. And of the fatalities, 61% were male — following a statistical trend seen across the country.

The death toll figures to grow quickly this week.

Persichilli, who had been predicting the surge would come during the middle of April and last into May, said Saturday it’s clear the surge already is starting.

The number of overall cases continues to surge as well.

New Jersey’s overall total is second-highest figure in the nation, training only New York (which has an astonishing 114,174 cases). Bergen County, which passed the 5,000 overall mark Friday, topped 6,000 on Sunday — a total only 12 states have reached.

Gov. Phil Murphy, Persichilli and other officials have been saying the rise in cases is expected due to a variety of factors, including increased testing. There are now more than 30 sites in the state doing some form of testing.

But it also clearly demonstrates that community spread is here.

Murphy, clearly pained when announcing the fatality total at his daily briefing Saturday, said the state will spare no expense to save even a single life. He also has said repeatedly that may not be enough to slow the ever-increasing number of fatalities.

No exception: Physician practices are not immune to today’s challenges when...