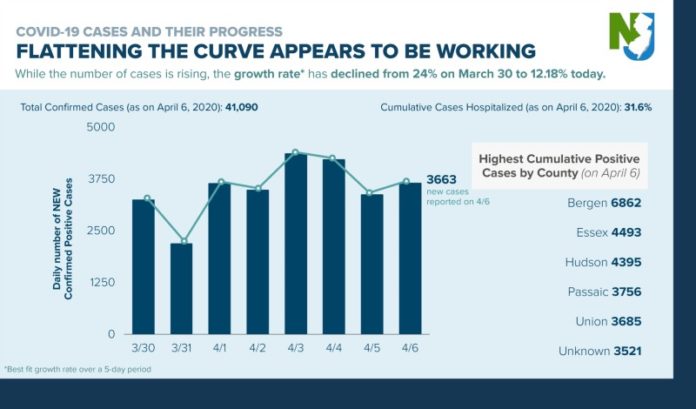 Gov. Phil Murphy presented evidence that the state’s ambitious social distancing measures have been working, saying during his daily coronavirus briefing Monday that there is a decline in the growth rate of new cases, from 24% day-over-day March 30, to roughly 12% Monday.

But he just as quickly said the state’s residents cannot let up in their efforts.

“We can all take some pride in the work we’ve done so far,” he said. “The curve is flattening. But this is no time to spike any footballs. Even if the curve is flatter, we still have a week and a half to go, at least, until we hit the peak. This isn’t over — not by a long shot.

“Our charge to you remains the same — keep social distancing, keep washing your hands, keep staying indoors and keep being smart.”

Murphy pointed to a series of charts and graphics to make a data-driven point.

He started with the progressive rise in the total number of positive test results, the one which showed the drop from 24% to 12%. 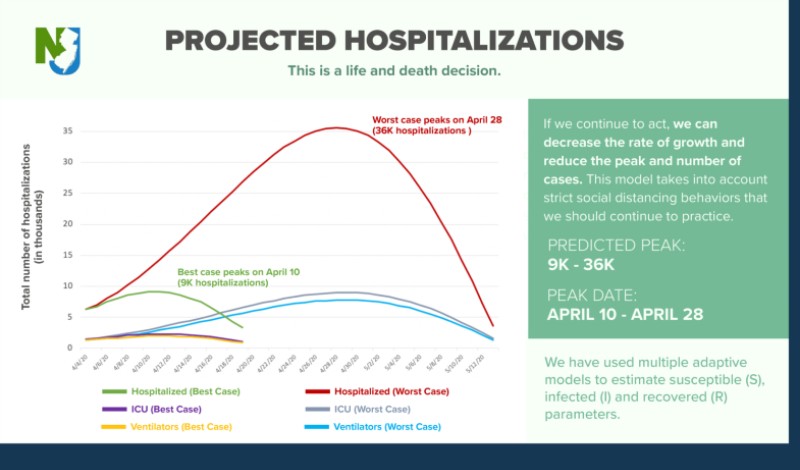 “As I have said many times before, we fully expected these numbers to rise to the levels they are, and we expect them to go higher,” he said. “However, what we are seeing —in real time, and over the past week — is a decline in the growth rate of new cases.”

Murphy said it’s a sign of a flattening curve.

“This means that our efforts to flatten the curve are starting to pay off, even with the lag time in getting testing results back from the labs,” he said. “There may still be anomalous days with spikes and troughs — and we’ve seen them already — but the overall curve is beginning to flatten. Our job now is to keep flattening it to the point where our day-over-day increase is zero.”

Murphy then showed slides that showed lessening the curve will pay off on the underside of the peak.

“The difference is literally in the 420,000-plus positive cases we can prevent,” he said. “This should be all the incentive we need to keep doing exactly what we’re doing. Because this is not a game — it is, in every sense, a matter of life and death.”

Murphy said the projections — and, he said, those projections can and will change daily — show the state currently would be able to get through the crisis with the projected number of hospitalizations.

“If we keep up with our current practices, we can get through the peak with the hospital beds that we are preparing — the new wings, the reinstated buildings and the field medical stations,” he said. “It will be tough, and it will be stressful, but our health care system can get through this intact.

“However, if we relax our social distancing, and we put ourselves on the higher curve, we will overwhelm the system to the point that all of our contingency plans, and then some, will need to go into effect. Our health care system will be overrun with a surge four times what it could be.”

Murphy said he understands the nicer weather will make this challenge more difficult.

“The temptations will grow and not lessen,” he said. “I’m fearful that too many people will hear, ‘Hey, this is working,’ and sit back and maybe put their feet up. We cannot let that happen under any circumstances. We’ve got to kill this. Once we’ve killed it, we can responsibly begin to put one foot in front of the other.”

He said he is hopeful the state can reach that day. But continued to clarify that he does not feel the state is there yet.

“While we are not anywhere close to being out of the woods as of yet, we are on the right path to get there,” he said.