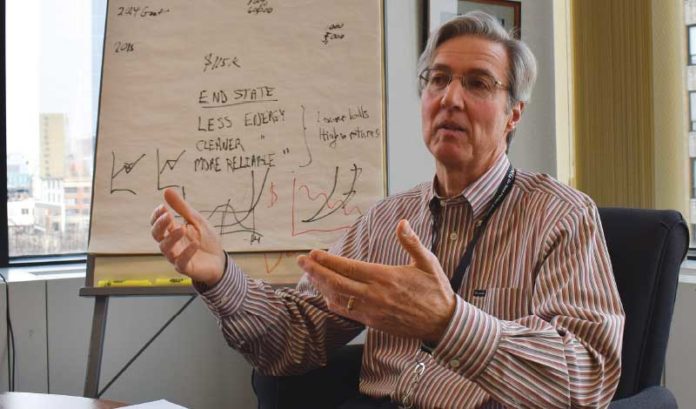 Like all leaders, Public Service Enterprise Group Chairman and CEO Ralph Izzo is concerned about his employees and the welfare of the state.

It’s why the company donated all the Personal Protective Equipment it had gathered from previous health crises — including more than 50,000 surgical and industrial masks. And why its foundation has made a priority out of feeding children who are missing the meals they were accustomed to receiving at school and various after care programs.

But, while PSEG has put in new workplace rules in accordance with social distancing and was one of the leaders in declaring it would not shut off anyone’s services due to an inability to pay, Izzo can’t help but think about how things can be — and need to be — different on the other side of the COVID-19 outbreak.

“So, we’re going to do all we can to help New Jersey make sure it’s not an L-shaped recovery.”

Izzo said PSEG can help in three ways, all of which he said will create jobs and make the state more energy efficient.

Yes, they will cost money, too.

Here’s a look at his three ideas:

Izzo said he wants to hire as many as 5,000 workers to do audits in homes and businesses to show people how and where they can reduce costs. He said the company had a plan in front of the Board of Public Utilities before the outbreak and he felt it was receptive. He hopes the unemployment impact of COVID-19 will make the BPU even more interested.

“It’s a great way to deploy folks who would need a very modest amount of training in a short period of time,” he said. “And, at the same time, it puts in place the equipment in people’s homes that will help them reduce their energy bill.

Are consumers using energy differently during the outbreak? Izzo said PSEG can’t tell. He said the company’s metrics only show usage for the month. Advanced metering infrastructure improvements would allow PSEG to make more meaningful energy efficiency recommendations — as well as get a much better idea at which units are no longer efficient.

“This is not a time to be picking on anybody and I’m not being overly critical because, to the credit of the Board of Public Utilities and its current president, Joe Fiordaliso, they have encouraged us to come in and seek a permission to put advanced metering infrastructure in,” he said. “But, right now, we have blindfolds on.”

Any upgrade could cost $500 million. The state, however, appears to be long overdue. Izzo said New Jersey ranks No. 48 among states in advance metering infrastructure.

“We cannot continue to do things the way it was done 100 years ago and ignore the role of technology in terms of being able to monitor people’s consumption more frequently,” he said.

Izzo said the company is going to have made adjustments to how it collects payments after the crisis is over.

“We are going to have to make some adjustments in terms of customer payment patterns,” he said. “We are not shutting anybody off right now. We were one of the first, if not the first utility to make that announcement, way before anybody ordered us to do, which I think the state has correctly and I think rightfully done. And that, I think, is going to then involve a lot of customer-tailored repayment, once we do get ourselves back on our feet.”

Izzo said the health of his workforce also is a top priority. He said the company has more than 30 COVID-19-positive employees, though none are hospitalized. A few hundred others are self-monitoring, he said.

PSEG also has taken steps to limit that number going forward when crews go out.

For starters, they now travel in the same four-person groups — which would limit the spread should one member of the crew test positive. In addition, call center employees — all of which are now working from home — ask more questions before scheduling a service.

Izzo stressed PSEG does not refuse service, but he said some answers will let crews know they need to take extra safety precautions before entering a residence.

His fears on the business side relate to a major energy outage. Izzo said he knows the necessary work rules they have adopted has made them slightly less efficient. But a major outage would be a bigger problem for one reason: There would be limited help available.

“You can always rely on other companies to send in help, because, typically, the country doesn’t all experience a major storm at the same time,” he said. “But, right now, the whole country is experiencing the pandemic.”

NJPAC names Ostrowsky, Goldman as board co-chairs, will succeed Strangfeld