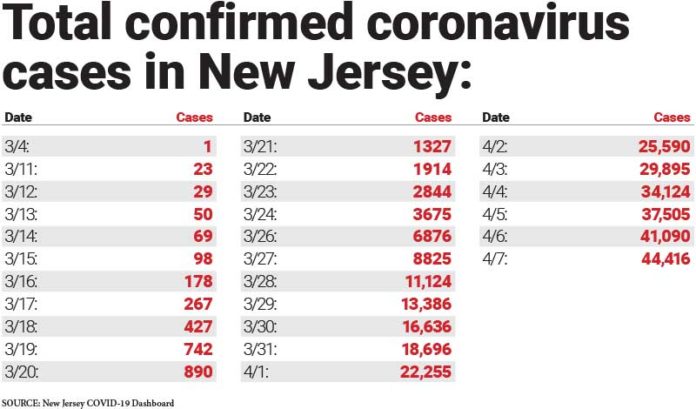 Gov. Phil Murphy signed an executive order to close all state and county parks Tuesday — which just happened to be the second consecutive day of perfect weather.

Murphy, speaking at his daily briefing, said he is concerned that residents are mistakenly thinking that open-air facilities in themselves help stop the spread of COVID-19. That is not the case, he said.

“We have seen far too many instances where people are gathering in groups in our parks, erroneously thinking that, since they’re outside, social distancing doesn’t matter,” he said. “Nothing could be further from the truth.

“We understand that staying home is hard, and that you need to get some fresh air. But you must do this close to home. Take a walk or a bike ride in your neighborhood, or at a park in your town that is open.”

Murphy stressed he does not want residents searching elsewhere for open-air environments.

“We need 100% compliance to flatten the curve, and, unfortunately, that now requires us to take this step,” he said. “Do not think that I take this action lightly. Some of my fondest memories with my own children are beautiful spring days in parks playing soccer and enjoying our family. But my focus, and my sole mission in life right now, is the health of every New Jersey family.”

Here are other notes from the briefing, which is continuing.

Murphy signed an executive order indefinitely closing public schools and cancelling statewide assessments. He also said he is waiving the student assessment requirement for graduation this year, including the portfolio appeal process.

“This means that the 13,000 current high school seniors who have not yet satisfied the student assessment requirement will no longer have to submit a portfolio appeal in order to graduate,” he said.

The order also waives the use of student testing data for educator evaluations, which Murphy said wasn’t feasible anyway, given that the state has canceled this year’s standardized tests.

“It’s almost unfathomable,” Murphy said of the fatalities, noting just under 1,000 have come in the last week.

Health Commissioner Judith Persichilli said there are 7,017 people in the hospital, both those with confirmed cases of COVID-19 and those under investigation — therefore waiting for test results.

Persichilli said there is a 43.77% positivity rate on tests.

Attorney General Gurbir Grewal and the director of Alcoholic Beverage Control is seeking to revoke the liquor license of a pub in Blairstown that has twice been cited for being open.

State Police Superintendent Col. Pat Callahan said it’s a sign the state will do all it can to force businesses and individuals to comply with social distancing measures.

There is now a confirmed case in approximately half of the state’s long-term care facilities. Persichilli said the fatalities are becoming overworked — and have reached out to the state, asking for more workers.

Persichilli said the state is working on a plan to help facilities, which could include moving some healthy residents to other facilities.

Murphy, along with Callahan and U.S. Sen. Cory Booker, toured the Federal Emergency Management Agency field medical station being set up at the New Jersey Convention and Exposition Center in Edison. It is the state’s second field medical station, and will be its largest, at 500 beds. It intends to open Wednesday.

Murphy extended, by 30 days, the public health emergency that was initially declared March 9. These declarations, unless extended, expire after 30 days.

Murphy thanked Hilton and American Express, which are donating up to 1 million hotel room nights across the nation and through the end of May to doctors, nurses, EMTs, paramedics and other frontline medical workers.

“We know that there will be front-line responders in our state — including many of the volunteer medical responders we are bringing in — who will need place to stay throughout this emergency, and we cannot thank Hilton and American Express enough,” he said.

Any company or individual who would like to make a donation should go to covid19.nj.gov/ppedonations.

Murphy said he, New York Gov. Andrew Cuomo and Connecticut Gov. Ned Lamont are working on a regional approach to dealing with the upside of the curve.

Murphy, on first signs that the state is bending the curve:

“We cannot be happy with only reaching a plateau — we need to keep strong and keep determined to see the curve begin to fall. That’s going to require many more weeks, at the least, of us being smart, and staying at least 6 feet apart.”