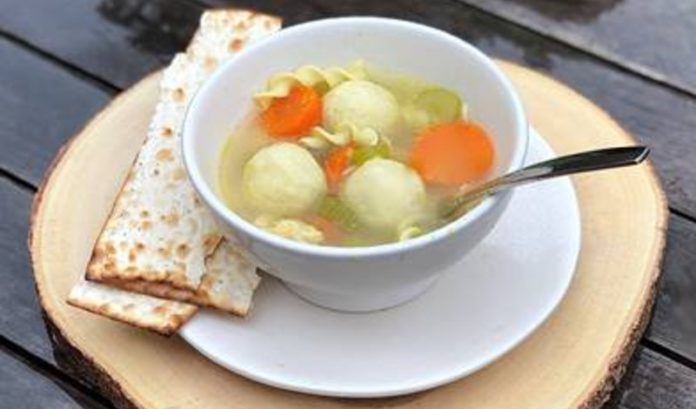 The wife-and-husband team of Lauren Hauck and Chad Hauck of West Caldwell had no idea there would be a growing demand for food delivery — especially homemade food delivery — when they started ZUP Soups last summer.

It was just a side hustle for entrepreneurial novices: She’s a nurse and he’s a carpenter.

Months later, in the midst of the COVID-19 outbreak, demand for their matzo ball soup has never been higher during the state’s stay-at-home recommendations.

“Most restaurants are closed, and, of those that are open, they don’t deliver,” Lauren Hauck said. “We do deliver. People have to eat at home, so we are there for them.”

The couple, who produce a batch of matzo ball soup each week at Garden State Kitchen, a commercial kitchen in Orange, said they fill online orders by delivering to within a 15-mile radius, mostly in Essex County. For orders beyond 15 miles, they will set up a central pickup location.

The made-to-order soup is priced at $5 a pint and $10 per quart. Each weekly batch is good for 40 quart-sized and 40 pint-sized portions.

With Passover starting Wednesday, this traditional Jewish food should be in high demand. ZUP Soups sent out an email blast Saturday to gauge interest. Hauck said, based on that, the couple could produce as much as double what they ordinarily prepare.

Of course, Hauck feels their success is based as much on the quality of the product as the now-pressing need for fresh food.

“Matzo ball soup is sold in just about every diner in New Jersey and, really, it doesn’t taste very good,” she said. “So, we’re filling a void. Friends who tasted ours encouraged us to sell it. At first, I thought that was ridiculous, but now look at where we are.”

Hauck said the secret to her recipe — a modified version of her Aunt Eve’s soup — is a better blend of spices, using only white-meat chicken and including hearty, large-sized vegetables. She said the product is more than just a meal.

“Some say the soup has healing powers,” Lauren Hauck said. “I believe them.”

Healing people has always been a part of Hauck’s life. She is a registered nurse who worked in emergency rooms for 14 years, briefly worked as a private-duty nurse and has since started working as a per diem nurse in local urgent care centers in New Jersey.

“I like to take care of people,” she said. “I never intend to leave nursing completely. I find the void left by not working as a nurse full-time is filled by taking care of others through the soup, with its healing and comforting properties.”

The soup has been delivered to nearby urgent care facilities to feed her overburdened coworkers, as well as to rescue squads and police stations.

The Haucks have sold the soup at West Orange and Montclair farmers markets and were present at food-truck events — even if their product didn’t completely fit the format.

“We weren’t actually in a food truck; we were that company that set up a tent in between all of the food trucks, and we sold the soup out of that,” she said.

Hauck said she has no immediate plans to expand her staff; however, future business goals include having the soup sold in stores and expanding the business’s geographic reach. She said GSK has offered an environment where they have been able to grow and seek advice from other likeminded makers and the owner of GSK, Kris Ohleth.

“We might have to go to the kitchen two, three or four times per week, but until we really need (extra help), it’ll just be the two of us,” she said.

Additionally, the Haucks have their two children to care for (ages 1 and 3).

“My 3-year-old is quite articulate,” Lauren Hauck said. “She sees us and says, ‘How many customers ordered the soup this week?’ You know, kid questions.”

The marketing efforts are managed by Lauren Hauck, who is active on social media channels such as Instagram and using the automated email marketing platform Mailchimp.

The name ZUP Soups came from a brainstorming session she had with her mom and husband.  She gained valuable advice from a marketing friend.

“He said it had to be a one-word name that was fun, catchy and memorable,” she said.

She extended the “fun” side of the operation by adding a second type of matzo ball based on its size. There are Murray balls (standard size) and Marvin balls (bite-sized).

“The bite-size are for kids, and they love them; honestly, the Marvin size is more popular overall,” she said.

Once businesses reopen, Hauck will be sending samples to California to have them freshness tested. That is one step in the process toward making the soup available in stores.

“You’ve seen the ‘Best Before’ dates on food products?” she asks, “That means the product was freshness-tested.”

This week, she’s hoping there will be plenty of New Jerseyans willing to give it a taste test.

CVS now giving COVID-19 vaccine at more than 100 locations in...