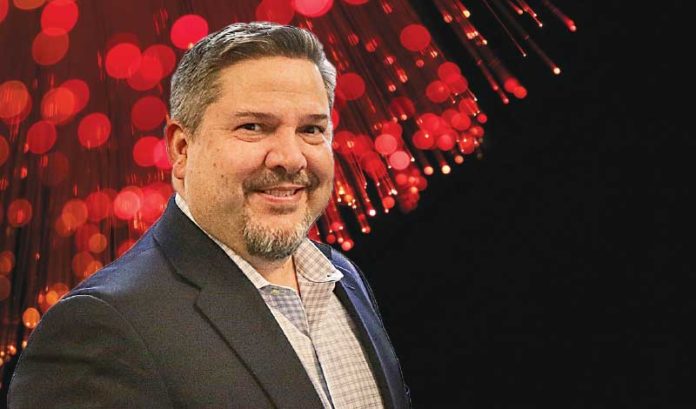 There were all the early inklings one needed to make the departure of one of New Jersey Innovation Institute‘s most senior leaders for a new job at University Hospital not as surprising as it would otherwise seem.

Shereef Elnahal, head of Newark’s University Hospital, has been quite publicly a fan of NJII’s Tomas Gregorio. When Elnahal was the state’s commissioner of health, he heaped praised on Gregorio’s work at NJII, which involved a massive project to connect data across all Garden State hospitals and other health care centers in a statewide exchange.

Regardless, when the hospital announced this week it had recruited Gregorio, NJII’s senior executive director of health care systems innovation, as its new chief innovation and technology officer, it wasn’t the most predictable news — especially given that it came amid the unprecedented crisis presented by the spreading coronavirus.

Gregorio, who joins two other all-star appointments to the hospital’s leadership team, talked about why he made the transition and what lies ahead for him.

ROI-NJ: Before we get into talking about your new role — what are you leaving behind at NJII?

Tomas Gregorio: For (Donald) Sebastian, the president and CIO of NJII, I was employee No. 1 — his first hire. So, we’ve always been lock, stock and barrel in line with what needed to happen. In five years, through our work (with the New Jersey Health Information Network), we were able to save the federal government $170 million and affect millions of lives. I feel all these individuals who were trained by me, some of whom were former students — and I would pick them out of my class to work with me — have done a great job. So, I feel NJII is left in good hands. All the same relationships are in place. I feel they’re in good hands. And, by the way, this isn’t goodbye; it’s an expansion of our mission. For me, knowing everything that I left behind allows me to bring it inside a hospital as I move forward with innovative ideas and things I know we’ve worked on in the past. Also, Simon Nynens, the new CEO at NJII, is very dynamic and led a $200 million company. So, I really see a lot of growth in the future of NJII.

ROI: How did the conversation initially come up that you might trade your position at NJII for a C-suite role at University Hospital?

TG: Since I’ve been working at NJII, I’ve always talked to all of our hospital clients about that innovation hospital partner that can take the innovation we do to the next level. How can we (at NJII) be a part of the core of a hospital that’s trying to make innovative change on a scale similar to the good things we were doing at NJII. Shereef Elnahal and I had established a relationship that goes back to when he was (commissioner of the New Jersey Department of Health). And that really laid the groundwork for finishing the health information network we were working on here. We got to talking about what it means to be an innovation hospital, and there were things he wanted to do and he needed help with it. So, he asked if I’d be interested in doing that work with him. He’s one of those people who are very much into technology and thinking about improving the patient experience via technology. How to improve the experience for the more than 3,000 employees he had. So those conversations evolved to the point at which I was presented the opportunity to be a member of the office of the CEO there. It’s something I’m excited about.

ROI: It goes without saying that this a unique occasion to be entering the leadership ranks of a hospital — during the state’s fight with COVID-19, especially at a hospital that’s front and center in that battle. What do you expect you’ll be doing as part of that?

TG: The role will allow me to pitch in from administrative perspective when needed. I do think that technology has to play a big role in how you can use cameras and telemedicine to help these front-line staff that are struggling to keep up with the demand of all the patients in hospitals. I’m going to meet (Elnahal on Tuesday), and I’m sure I’ll get an idea of what things are going. I haven’t been there, so I don’t know what their exact problems are. And they’ve been consumed with working ungodly hours. But I’m ready for the fight; I want to be a part of it.

ROI: In what ways do you expect technology plays a part in the challenges faced by hospitals during the pandemic?

TG: These are ideas based on working from home, seeing the struggles going on and our connections to the Department of Health. We spent all this money going electronic with records. How do you think that volunteer physicians, EMS workers and people just pitching in are able to document in these systems? They don’t use them every day. What’s needed to provide support on documentation — that’s an important part of what I don’t know. Anecdotally, I hear that documentation isn’t good. Many doctors retired because they didn’t want to take on this electronic health wave that’s been happening over the past decade. So, now, these doctors are coming back — and what are they doing? Writing notes on paper and having someone transcribe them? I don’t know for sure what the current conditions are. But we’re always trying to find ways to improve how the documentation happens. So, can you create scribes? And then there’s telemedicine, for which many rules have been relaxed. That’s definitely a solution, but in what particular workflows does it work, versus just using the stuff we use every day that may not be as secure, such as Skype and FaceTime? These are things I have to assess rather quickly. Quite honestly, I don’t know if that’s what I’ll be doing until I get there.

ROI: Is there anything else that has caught your eye when it comes to how technology is being utilized right now?

TG: You see on the news on these reports of these nurses being wonderful individuals and helping family members FaceTime with loved ones before they’re intubated or if they’re not doing well. So, we’ve been thinking about finding ways that we can provide support at NJII, thinking about working with (original equipment manufacturers) in other organizations to be able to provide tablets or phones that work on Wi-Fi so nurses don’t have to use their own. There’s donations available to provide that equipment to hospitals and the state to have that FaceTime connections with loved ones. My neighbor was in the hospital, in bad shape. His kids dropped him off early in the morning, but didn’t get an update until the afternoon. My friend’s mom died in a nursing home due to complications from the virus. How do you help that human connection necessary in those times? That’s something I hope we’ll be able to launch with the help of Verizon or other companies that provide that technology.