Gov. Phil Murphy defended his decision to close state and county parks, saying it was a decision based on science.

Murphy, speaking at his daily briefing Thursday, said he made the decision Tuesday because of reports he received from the prior weekend.

“In the first good weather weekend of the spring, the evidence from state park police and other observations up and down the state was, unequivocally, an enormous amount of gathering in close proximity of individuals in both state parks and county parks,” he said.

Murphy also said there was an “uncomfortably” high number of out-of-state license plates.

“We didn’t just wake up on a whim and decide to close state and county parks,” he said.

Murphy said his decision to limit customers in retail stores was based on anecdotal evidence as well, noting that many stores were doing the right thing. 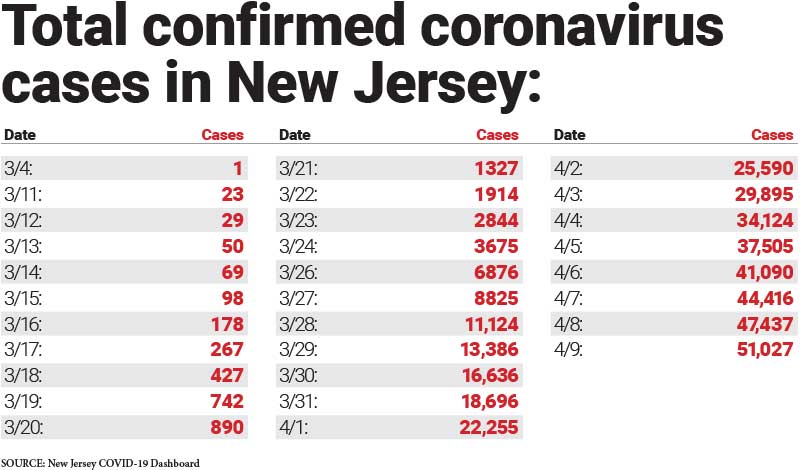 The state also announced 198 fatalities; the state total is now 1,700.

Murphy said 7,363 residents are hospitalized, with 1,523 requiring intensive care. A total of 1,551 are on ventilators. Murphy also announced 471 New Jerseyans were discharged and returned home.

More than 214,000 more New Jerseyans filed for unemployment insurance benefits last week. More than 575,000 have applied in the past three weeks. Murphy stressed patience for those seeking assistance.

“We know that many of you are having difficulty accessing your benefits because of long wait times or online lags,” he said. “We know this. We’re working as hard as possible to make it easier given the age of our systems and the unprecedented stress.”

Murphy said no one will be denied any of their unemployment benefits.

Those looking for work can go to the state’s covid19.nj.gov website, which contains nearly 50,000 active job listings from more than 630 employers.

Murphy, responding to reports that the Federal Emergency Management Agency may begin closing some testing sites around the country, said he has a commitment from FEMA that the New Jersey sites will remain open until at least May 31.

Murphy said it’s too early to say how the outbreak will impact the state’s budget — only to say that the state has been crushed.

“The impact on the state budget is significant; there’s no other way to put it,” he said.

Murphy also said the order makes it clear that all claims covered by the insurance policy must be paid out to those who are within these grace periods, and also that insurers cannot demand repayment of unpaid premiums in a lump sum at the end of the grace period, but rather must spread these back payments out over the remainder of the insurance term.

Murphy thanked Marriott, which will be providing rooms at the Marriott Courtyard Newark free to nurses and doctors.

Murphy thanked religious leaders for maintaining social distancing during one of the biggest religious weeks of the year.

“Many of our communities of faith have taken this to heart, especially given the season. There have been online seders, and many churches will be offering online Easter services. These are critical means for us to come together, even though we have to stay apart. I know it’s not what we’re used to, or necessarily what our faiths teach us, but right now it’s what we have to do.”