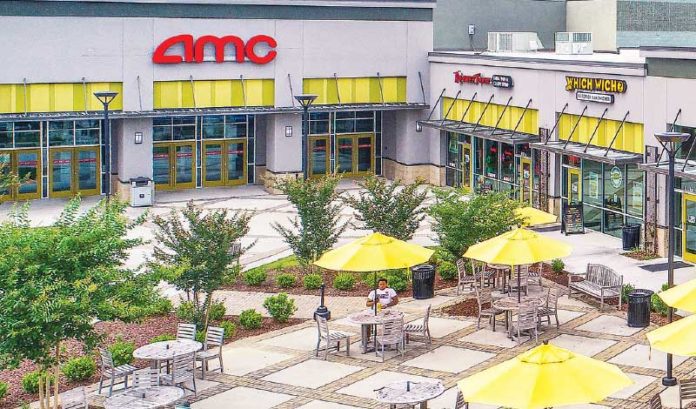 When it comes to tracking down tenants willing to keep their feet planted in a location by reinvesting in it, real estate professionals are finding them where they least expected to …

On the spilled-soda stick of a movie theater floor.

Even as it seems the streaming wars waged by Netflix and others pose an existential threat to the theater business, investors in neighborhood shopping developments are finding that the silver screen is still without compare when it comes to retail centers.

Daniel Salonis, managing partner at Progress Realty Partners, a debt brokerage and private equity firm that acquires commercial real estate, said that, at one North Carolina shopping center the Tinton Falls-based firm closed on, the AMC movie theater was one of the most exciting features.

“Whenever a tenant is putting a lot of money into their own space, it shows their commitment,” he said. “And they’re normally not doing that unless they see within their own sales it’s going to be profitable for them.”

If the shopping center his company acquired had centered around an older theater that was falling into disrepair, Salonis doubts it would’ve accepted the deal.

But a lot of movie theaters today have been significantly refurbished from the days of schoolroom-hard, popcorn-pasted seating. Not only are screens larger and more high-definition than ever, chairs sometimes creepier than the scariest movie are being replaced by lounge seating now, Salonis said. Some are even starting to come equipped with massage functionality.

It goes hand-in-hand with the new image of these real estate spaces — a concept that is slowly migrating to the region’s cinemas after a reception as crowd-pleasers on the West Coast, Salonis said. They’re nicer; they’re also offering more.

“It definitely depends on the market you’re in,” he said. “But, generally, you’re seeing a lot of movie theaters shifting to more of a dine-in experience, where people are offered food or drinks. We looked at a deal recently with a movie theater with a full-service bar and basically a whole restaurant within the movie theater.”

There’s no end to what movie theater businesses are experimenting with. Cinergy Entertainment Group, which just has a few locations scattered across Texas but is expanding to other sites throughout the country with the help of Northeast developer JLL, is adding not just the dine-in concept to its amenity mix, but bowling arcades, escape rooms and even ax-tossing.

These businesses are hoping to find new ways of attracting people as streaming video competitors — Netflix primarily, but also now Apple and Disney — prove capable of producing their own Oscar-caliber movies. AMC Theaters itself is launching an on-demand film service.

But I don’t think movie theaters are going anywhere, even if we might see less of them. Obviously, the idea that people would rather stay inside and watch streaming services like Netflix and binge-watching … that’s all a real phenomenon. But people still want to go out. And theaters play into the experiential aspect that people are looking for.”
— Daniel Salonis, managing partner, Progress Realty Partners

Due to those streaming struggles and the amount movie theater attendance has declined, small theaters in particular have in recent years have fallen short of being the marquee attraction of a retail center.

“But I don’t think movie theaters are going anywhere, even if we might see less of them,” Salonis said. “Obviously, the idea that people would rather stay inside and watch streaming services like Netflix and binge-watching … that’s all a real phenomenon. But people still want to go out. And theaters play into the experiential aspect that people are looking for.”

When theaters haven’t had blockbuster years and have been forced to shutter, the quirks of the way a theater is designed can be awkward for real estate professionals looking to make it suitable for occupation.

“It can be very difficult as well as very expensive to repurpose those spaces,” Salonis said. “You have the steep slopes within each theater. You also have the really tall ceiling heights. So, it’s a unique format.”

Sometimes real estate firms leave the spaces in a “white box” condition, a term referring to a building’s unfinished state prior to a tenant’s own remodeling work.

“And you can try to bring a larger retailer into that space … but, whenever one of those theaters goes out, it can be a challenge for the ownership of the property,” Salonis said. “It takes a lot of money to attract new tenants in those cases.”

Thankfully, not all movie theaters are ready to roll the credits.

Like the traditional brick-and-mortar stores that often surround them, movie theaters are finding new ways to keep the lights on.

“As it has been said, the idea that retail is dying isn’t further from the truth,” Salonis said. “It’s evolving, for sure. … It’s becoming a lot more experiential. People want to have an experience when they go shopping, even if online businesses have a growing market share just because of the convenience.”