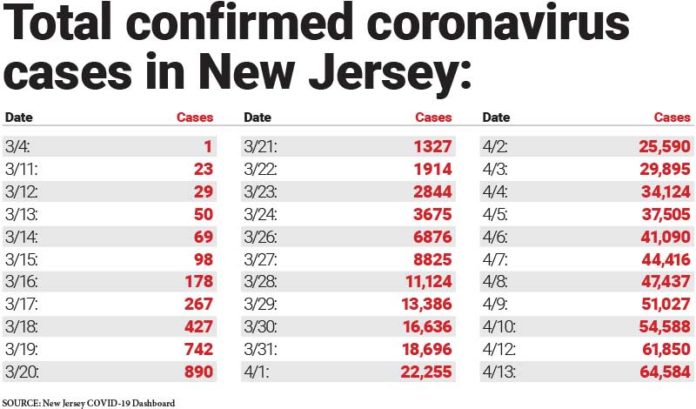 The program, which provides grants to New Jersey small businesses impacted by the COVID-19 outbreak, was overwhelmed by applications when it launched April 3. The EDA said it was oversubscribed within an hour of opening — and had more than 30,000 applications in total.

“Small businesses are the heartbeat of New Jersey’s economy. Ensuring they have the resources they need to withstand the COVID-19 outbreak is critical to keeping our economy afloat and setting the stage for a strong recovery,” EDA CEO Tim Sullivan said. “Due to the unprecedented scale of this outbreak, demand for emergency support is greatly outpacing what the NJEDA can provide alone. We encourage companies and individuals that have the means to help to step in so we can expand this program to serve the many businesses that need help.”

A description of the EDA program can be found here.

In other words, there are not enough critical supplies — such as ventilators — for all those who need them.

She said the framework creates meaningful access for all patients — and that there are no exclusions based on age, disability, ethnicity, sexual orientation or other factors. To the extent possible, Persichilli said, those making allocation decisions should be unaware of those factors.

Gov. Phil Murphy said the state will do whatever it can avoid this scenario, but said it would be abrogating its responsibilities if it did not have something in place.

Murphy announced he has signed an executive order prohibiting internet and phone services from being shut off until 30 days after the current public health emergency has ended. He said all service downgrades, service reductions or late fees due to nonpayment are prohibited unless they are imposed in accordance with a policy approved by the Board of Public Utilities. He also said any internet or phone service that was disconnected due to nonpayment after March 16 must be reconnected.

“I am doing this for a simple reason — people need to stay connected,” he said. “Last month, most of our service providers voluntarily took these steps, in accordance with FCC policy, to protect their customers during this time — and we thank them for their partnership. However, some providers have loosely interpreted what is means to stay connected, so today we are forcing them to do what’s right.”

Murphy said 100,000 medical masks arrived at a state warehouse this weekend, thanks to the government of Taiwan, and said another 200,000 will soon be on their way.

“To Ambassador Lily Hsu and the people of Taiwan, we cannot thank you enough,” Murphy said. “New Jersey is the proud home of hundreds of thousands of Asian Americans and Asian immigrants. Seeing this support from around the world means so much to our entire diverse family.”

Murphy honored Ruth Mandel, 81, who died Saturday. “Many of us know her best for her years as the director of Rutgers University’s Eagleton Institute, and, there, specifically for her leadership of the Center for American Women and Politics,” he said. “From that post, she inspired countless students — both female and male — to choose a path in public service and to run for elective office.

“But she was much more. Her story began in Nazi Germany. Her parents sought to flee, and, in 1939, boarded the ocean liner St. Louis to escape — but the St. Louis was spurned at every port it sought out, including here in the United States. Forced back, many of the St. Louis’ passengers would be murdered in the concentration camps, but, thankfully, Ruth and her parents were able to find their way to England and were spared. Eventually, they found their way to Brooklyn. In addition to her accomplishments in academia, she also served as a member of the United Stated Holocaust Memorial Council.”

Murphy on emergency triage document: “There are words that are in that document that we must underscore: No exclusion criteria. That’s period. That’s an absolute statement. Individual assessments will be taken. No matter in terms of judgments of a person’s worth. It turns out, you can’t buy your way to salvation. That’s the way it should be.”

Murphy on internet access: “Our kids need internet access for remote learning. Individuals need the ability to telework and seek medical attention electronically. Families need to be able to keep each other informed. This is no time for anyone to have their connection to the world severed.”

Murphy on staying the course: “We’re going through hell and back. Let’s only do that once.”

Murphy on potential $9B bond sales: ‘We are going to have...

Immunomedics’ Semerjian steps down as CEO