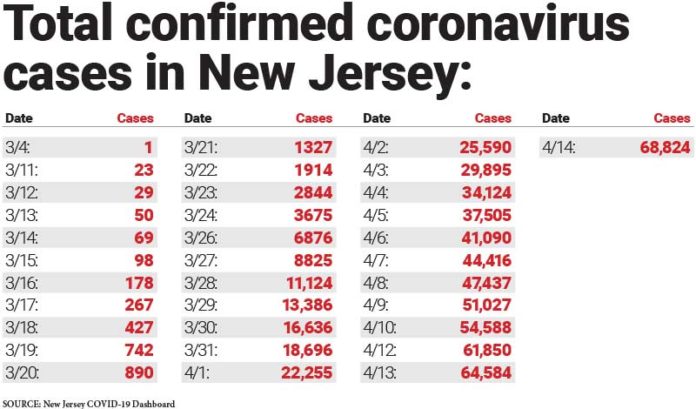 Gov. Phil Murphy said he would have an announcement on schools in the state Friday. And, while the governor did not give a hint at what it may be, he did say there are more options than just reopening or remaining at remote learning for the rest of the year.

“We’re looking at a number of alternatives,” he said.

Murphy, speaking at his daily coronavirus briefing Tuesday, said the decision will be based on facts.

“We’ll have news to report on the school year in the next couple of days,” he said. “That’s something we’re taking very seriously. We’re looking — as we said all along — we make these calls based on the facts, and we’ll continue to do that.”

Here are a number of other updates.

Murphy announced there were 4,059 more confirmed COVID-19 cases Tuesday, bringing the state total to 68,824. Murphy said that, due to the weekend notification, it might be more precise to average Monday and Tuesday numbers. On Monday, Murphy reported 3,219 new cases.

Murphy also announced New Jersey had 365 more fatalities connected to COVID-19 cases Tuesday, bringing the state total to 2,805. Murphy also said that, due to the notification procedures, it cannot be assumed that 365 died in the past 24 hours.

The hospital numbers, as of the 24-hour period ending Monday night, are as follows:

Health Commissioner Judith Persichilli said she is intrigued by the new FDA-approved saliva test that is being used in Middlesex County. The test can be self-administered — meaning it would not require someone wearing personal protective equipment and could be taken in wide scale.

In addition, Persichilli said it will allow the state to collect the data vital to the state’s strategies going forward.

“I’ve been in touch with the chancellor of Rutgers Biomedical and Health Sciences, Dr. Brian Strom, about this exciting development, and we look forward to future discussions with him and how this test can benefit our residents,” Persichilli said.

Murphy noted the state now has more than 60 test sites, but said it is still not enough.

“There is no question that testing anywhere in our country is not nearly where it needs to be, and New Jersey is no exception,” he said. “We’ve made real progress and have more than 60 testing sites now in our state, but we need to do more. We need reliable, safe, quick access to testing for everyone, and we need it everywhere.”

Despite this, Murphy noted that the PNC Bank Arts Center in Holmdel has not been hitting the maximum 500 daily tests. The facility will be conducting tests Wednesday.

“So, if you are needing a test, we would recommend you head to Holmdel first,” he said.

Murphy said Raritan Valley Community College will open a site for Somerset and Hunterdon county residents on Thursday. You must be a resident, have an appointment and a note from a doctor. To make an appointment, go to www.Somerset-hunterdon.adlabscovidtest.com

State Police Superintendent Col. Pat Callahan said the state may be the first to receive a cleaning machine that can decontaminate equipment, potentially as many as 80,000 N95 masks a day.

Callahan said the state hopes to have it in place for University Hospital in Newark soon.

Persichilli announced there are 342 long-term care facilities in the state with COVID-19 cases, for a total of 5,945 cases being reported. She noted the state is working with these facilities to get them more health care providers.

Persichilli also said 123 facilities are prohibited from admitting patients because they do not have the ability to properly care for them.

Murphy said the longstanding issue with long-term health facilities is a nationwide issue. Simply put, these facilities were not set up to handle such a catastrophic health care event. Murphy also said he feels for the families who are struggling to get answers.

“Folks are rightfully looking for more communication and more answers than they’re getting,” he said. “And we’ve been pounding away on the operators to provide that; it’s their responsibility. It’s not a New Jersey-specific item. This is a huge issue across the country.”

Murphy on the future: “You leave the worrying to me and those of us up here. We’re working overtime to deliver what our state needs. We’re going to work with our neighboring states not just to get us through this, but to put in place the plan we need to responsibly get us back open and back in business, so we don’t see a COVID-19 boomerang.”

FDU Poll: Jerseyans split on whether kids should return to school...

St. Michael’s leadership: Getting an ‘A’ in Leapfrog is just the...