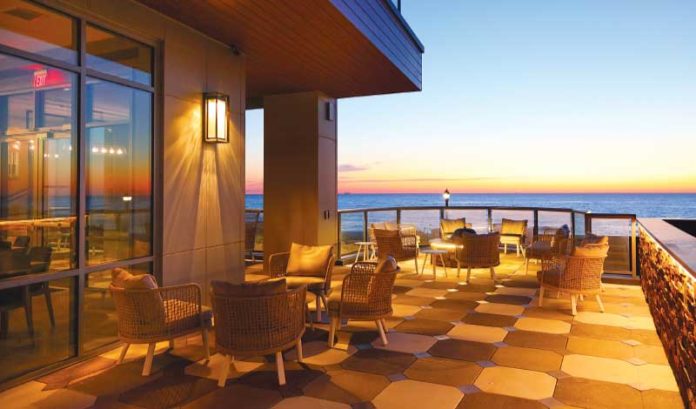 After closing on a penthouse in Asbury Park that fetched $5 million, Realtor Mary McAllister was thrilled to talk about the Shore city’s booming development. …

Especially the developments without the million-dollar price tags.

The broker and sales associate at Diane Turton, Realtors said the ultra-high-end residential market in the city — such as the marquee Asbury Ocean Club development, a 17-story luxury condominium and hotel that’s the largest of five projects headed by iStar in the city — has had a role in the city’s renaissance.

But she’s just as — if not more — excited about developments such as the aptly named Renaissance Village, where vacant parcels were turned into apartments that go for less than about $1,300 a month. McAllister sees that project, which opened last year, as well as the affordable new townhomes at nearby Boston Way Village, as being crucial to the city’s continued evolution.

“What I think is the beauty of Asbury Park is that the city attracts every walk of life and people in different socioeconomic ranges,” she said. “Right now, there’s a wide range of property values. And I hope it remains that way. I don’t think anyone wants to see gentrification pushing everyone out.”

McAllister herself moved to Asbury Park 16 years ago with her family. Needless to say, seeing a home sell for many millions would’ve been a rare sight at that time, given that the city has had a lower median income level for years that has only recently risen to about $40,000, according U.S. Census data.

The city, which still has a poverty rate of about 30%, was not known for its luxury housing market. What it did have was a growing arts scene and an interesting culture, which McAllister attributes to the city’s diversity.

“The arts community in the city — evidenced by the galleries in town, the music venues and more — has grown up here because of the affordability of the town,” she said. “That’s an important part of the flavor of Asbury (Park).”

But, if there were to be a comparison, and maybe an example of what a Shore town shifting to a more affluent residential base looks like, it would be found several miles north, in Long Branch.

Long Branch over the past two decades has seen its property values rise dramatically. That’s in spite of some setbacks, such as a fire in 1987 that destroyed a landmark amusement park and a portion of the city’s boardwalk.

A reversal of fortunes came in the 2000s, when Ironstate Development Co. rebuilt the attraction and started developing a mixed-use project known as Pier Village — now owned by Kushner Cos. and Extell Development Co. David Schoner, vice president of Coldwell Banker New Homes, said that development transformed the city’s image.

Empty-nesters are now flocking to the beachside community’s million-dollar luxury condominiums with ocean views, such as those being sold at 365 Ocean, a community developed by Mark Built Homes on a stretch of beach about a half-mile south of Pier Village.

Schoner, whose company has handled closings at the residential development, said 365 Ocean opened two years ago and is now just about half-sold. The remaining two-bedroom condominiums, which are expected to be sold by the fall season, are priced between about $900,000 and just over $2.7 million.

With this project and others, the city has been earning a reputation as the go-to Shore spot for more affulent Jerseyans.

“When you talk about renaissance, Long Branch has come a long way — even if it has taken a long time,” Schoner said. “If you go back to a place like Hoboken in the ’70s, you can see how long it has taken to make paradigm shift in socioeconomic composition of the city. Long Branch got started quite a bit later.”

But Long Branch is still many years ahead of the sort of development that’s been going on in Asbury Park to the south — not that everyone in that smaller seaside city wants to adopt the same look as its northern neighbor.

Regardless, Schoner believes all the Shore towns in the middle of their own versions of a renaissance are going to have a good run for the next few years.

That’ll be true, he says, even if the economy seems headed for some unknown shores.

“When you’re on the water — cities might take a nap, but they don’t fully go into a deep recession,” he said. “It’s good now and only going to get better. The population is growing, the interest is growing, restaurants are full. I don’t expect that will change.”

Reach Mary McAllister of Diane Turton, Realtors at: mmcallister@dianeturton.com or 732-774-4880.

Room with a view: Why NRIA is bullish on its Gold...

Ten-X: Northern N.J. among Top 5 market for investors to sell...