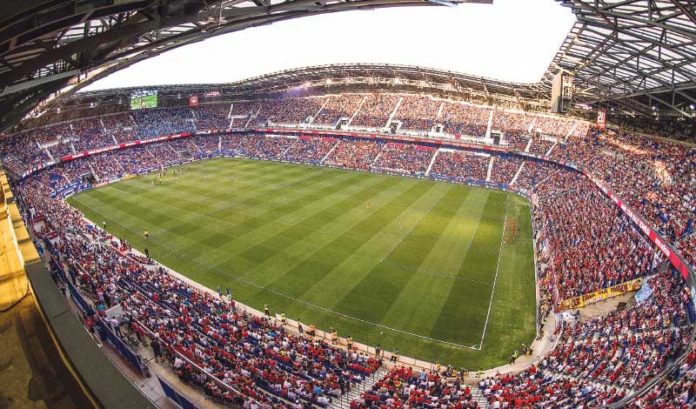 Harrison’s century-old branding was that it was the “hive of industry.”

Overshadowed by cities in closer proximity to Manhattan, such as Jersey City and Hoboken, the town couldn’t be said to have held onto that regional relevance throughout the rest of its history.

Then, exactly a decade ago, it became home to the country’s third-largest soccer stadium, Red Bull Arena. Today, the small town once known as a central manufacturing and trade hub is proving that it’s still alive and kicking.

The narrative in the headlines of publications such as the New York Times is that Harrison is next in line for a major renaissance. But, although it was never as visible as what was happening in places like neighboring Newark, the town’s advocates say the renaissance has been underway for years.

New York Red Bulls General Manager Marc de Grandpre dates it back to the introduction of the sports complex along the Passaic River across from Newark, the place where the former hive of industry is generating new buzz today.

“Harrison has been seeing a renaissance I would say ever since we became the anchor here and we decided to design and build our arena in the city,” he said. “We truly became the engine behind a lot of growth.”

De Grandpre said that, when construction started on the home stadium for the Major League Soccer team back in 2008, the population of Harrison was just about 13,000. There’s been a boom in the past decade in the town, which occupies just two-thirds of a square mile, and the population now stands at about 18,000.

The increase of residents in the town means new commercial enterprises are regularly cropping up in the Harrison Riverwalk promenade outside the arena, de Grandpre said.

“If you look at our environment, we have the arena and residential developments going on right in front of it,” de Grandpre said. “It creates this combination residential-entertainment-commercial district that you’ve seen at places like Wrigley Field in Chicago or Fenway Park in Boston.”

A reconstruction of the town’s PATH train station steps from that waterfront location — an effort that has been underway for at least the long as the arena was in development and has yet to be completed — has further incentivized more businesses and residents to flock there.

That’s been a selling point for developers — on top of being able to cite Red Bull Arena as an entertainment amenity. 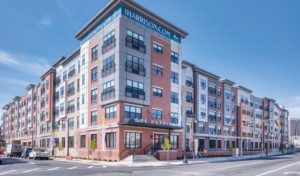 David Pantirer, a partner at BNE Real Estate Group, said Harrison is quickly being seen as one of the region’s most desirable places to live for commuters.

“It is really been a great market for residents who want to have quick access to the PATH train to New York — with it being just about 20 minutes away,” he said. “Almost 60% of tenants, from what we’ve seen, work in New York. About 20% work in Newark.”

BNE Real Estate Group has been active in the Harrison market for many years now, with the highlight being the 257-unit luxury rental community near the arena and PATH station, One Harrison, that it opened last summer. The building had all its units leased within six months.

“And the great thing is, we’ve seen enough demand to go around, even as other buildings are being leased at the same time,” Pantirer said.

One of the largest projects to first spring up near Harrison’s arena and now-bustling waterfront was a $750 million project by Ironstate Development Co. and Pegasus Group, which partnered on a sprawling, multiphase mixed-use community in Harrison.

As far as who is moving into these communities, Pantirer said it’s largely millennials who have been priced out of surrounding markets but still want to live in a transit-oriented community.

They’re coming to Harrison’s still-evolving waterfront district by the thousands, he added. As the word spreads about the up-and-coming neighborhood, it’s being viewed as a community worth considering a move to — as evidenced by the fresh attention it’s receiving in the press.

Harrison Mayor James Fife has been pleased to see the town viewed as a successful renaissance story.

But he hopes that all parts of the western Hudson County town receive the same amount of love.

“Our newer residents go to work, come home and Uber (Eats) their meals in — and that’s the millennials,” he said. “And, so, we’re working to get a lot of them acclimated to some of the older parts of Harrison. And, slowly but surely, they are becoming part of the equation.”