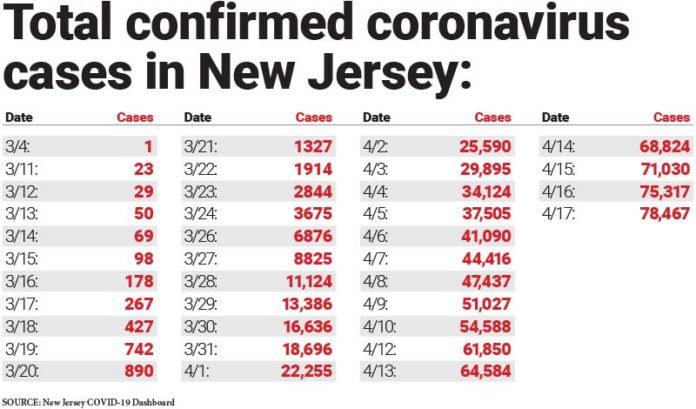 Health Commissioner Judith Persichilli said she is “cautiously optimistic” that the state has seen a flattening of COVID-19 cases — particularly in North Jersey — but Gov. Phil Murphy said the optimism does not mean the state is in any way ready to open up.

Persichilli went as far as to say this: “In the north, we have seen the peak. And we have not seen it in central and south — and it’s coming.”

Murphy said the act of determining a peak is complicated.

“I would define the peak as not a day in time, but as in a period of time,” he said. “And it feels like we’re still in the thick of it.”

Murphy described the coming months this way: “April is going to be our toughest period, assuming we keep doing what we’re doing. May will be somewhat better; we just don’t know how much better. And we’re hoping that we can have the health care infrastructure in place, and we can begin to responsibly open things up in the warmer months.”

The health care infrastructure line was the most important, he said.

Murphy said the state cannot reopen until he is confident it has the infrastructure in place — meaning mass-scale, rapid-turnaround testing and better contact tracing, among other items.

“From moment one, we haven’t had the materials and the scale in testing that we would remotely need,” he said. “And we’re going to need something that looks a whole lot more like that before we can respond responsibly and with confidence.

The state said more than 12,000 tests have been conducted at the two FEMA-assisted testing sites — an incredible amount, but not where the state needs to be, Murphy said. He said Rutgers University’s new saliva-best test is one of the reasons he has hope — but, again, he said more needs to be done to give him and residents confidence of a reopening.

Other notes from Friday’s briefing:

Despite his statements on mass testing, Murphy showed some optimism for the potential to reopen schools before the end of the year, saying he moved their current closure to May 15 with a purpose.

What that new school setting would look like — either in the spring or next fall — isn’t as clear. Murphy said he would venture a guess as it pertains to masking.

“I would bet the answer is yes — that we will be masked when kids go back to school,” he said. “That would be my personal guess.”

The hospital numbers, as of 10 p.m. Thursday night:

Persichilli noted the percentage of patients in critical care on ventilators has dropped to 81%, far lower than the peak of 97%.

Murphy announced that physicians who are licensed in another country but living in the U.S. can now apply for a temporary emergency license to practice medicine in New Jersey.

“New Jersey is the first state in the nation to fully embrace the tremendous wealth of international knowledge and experience to help us on our own front lines,” he said. “This will create a pathway for foreign-licensed physicians to put their skills to use in our state when and where they are needed most. Every member of our diverse New Jersey family has a role to play in our fight against COVID-19.”

“They better be listening to this. We expect them to adhere to the code of conduct (they) have signed on to. In the midst of an enormous health care crisis like this, that is a minimum standard of care, communication, etc. And we don’t hold this against the workers … it’s the operators, in particular. We expect a standard of care here and we will not relent on that.”

Capital Health will take over services of St. Francis on Dec....