Home Health Care Walk-out songs: ‘This is a way everybody can get reenergized and realize...
Facebook
Twitter
Linkedin 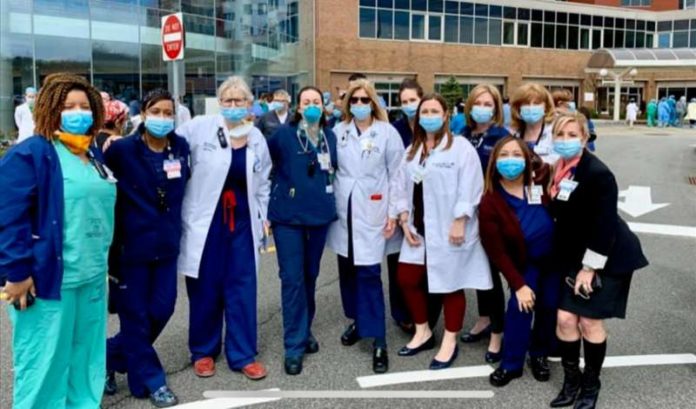 Kim Rosales was in the pediatric unit at Saint Barnabas Medical Center in Livingston when she heard “Here Comes the Sun” blasting over the intercom.

She had heard it a half-dozen times Thursday — and more times than she could estimate in the past week. Each time, it was cause for a celebration. It meant a COVID-19 patient was going home.

“The song came on and the entire staff stopped what they were doing, stopped, cheered, high-fived,” she said. “It was incredible to be a part of.”

Walk-out songs can be heard throughout the state.

Kerry McKean Kelly, vice president for communications at the New Jersey Hospital Association, said she’s not sure who or when started the practice — some feel Saint Peter’s University Hospital in New Brunswick was the trend-setter.

Kelly said most hospitals have adopted the concept after hearing about it through NJHA.

“I held a call last week with hospital PR people, which we do weekly during this crisis,” she said. “We talked about a way to celebrate discharges to contrast the daily toll of deaths in the news briefings. We wanted it to be uplifting for both the patients and the clinical teams who work so hard to make those discharges happen.

“We discussed the use of the overhead PA systems, similar to the longstanding practice in some hospitals that play a lullaby when a baby is born. The practice really seemed to take off after our call.”

And it’s not always the same song. The Beatles’ classic is heard at most of the hospitals in the RWJBarnabas Health chain. Holy Name Medical Center said it uses the theme from “Rudy.” Hackensack Meridian Health said its uses “Lean on Me” at its flagship campus in Hackensack.

It has become a small bright spot in the very intense days in our hospitals — and a reminder that every discharge is a life saved.

The reaction — and the significance — doesn’t change, Rosales said.

“It’s a way to be able to let the staff know there are positive things happening,” she said. “When you’re in the throes of it, sometimes it’s hard to see beyond that. This is a way everybody can get reenergized and realize that we’re doing is making a difference — that are we are saving people and getting people home.

“It’s had such a tremendous impact on the staff.”

And it does so at a time that emotional lifts are needed more than ever.

Rosales, director of clinical excellence and innovation at Barnabas, said she has never seen anything like this crisis in her nearly two decades of service there.

“Absolutely nothing that compares even remotely close to this,” she said.

It’s the little things, Rosales said, that helps get the staff through it.

“When the music comes on, everybody stops what they’re doing and starts dancing and cheering,” she said. “It’s a time for celebrating that we had a win.”

A hospital in New York state plays “Here Comes the Sun” as a patient is released to go home:

Murphy: ‘For those who don’t believe, I’m begging you … believe....