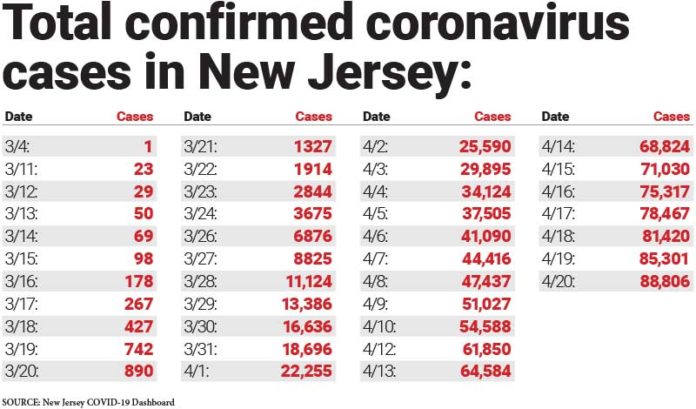 Gov. Phil Murphy, following a string of numbers trending in the right direction, said he will layout a “blueprint for our way forward” to open the state of New Jersey.

Murphy, however, cautioned that the state is nowhere near where it needs to be to eliminate restrictions. He said opening the state before residents are ready — and confident about their safety — would not be productive.

“To be clear, there is one overriding principle — personal health creates economic health,” he said. “It can’t be the other way around. Consumer confidence, the willingness of people to go out and shop, to eat out, and for workers to feel confident that their workplaces are secure only comes when people are convinced that their health is secure.”

Murphy, speaking at his daily COVID-19 briefing, said the blueprint likely will be broad in scope with not a lot of specifics.

“I would guess it will not be specific as to timing,” he said. “But it will be a series of principles and values that will guide us as we put the pieces in place to get back to some sort of new normalcy.”

The guide, Murphy said, will not be easy.

“Do not think for one minute that we are going to be able to flip a switch and return to life as we knew it,” he said. “We will be careful, and we will be strategic. We will continue to ask for you to play your parts. We will make decisions based on facts and medical science, so we do not experience a second, boomerang wave.”

Speaking specifically to small businesses, Murphy said reopening the economy would backfire for two reasons: a large spike in COVID-19 cases, and no customers at stores because people are still fearful for their health and that of their kids and families.

Murphy said he understands the desire of parents to get children back into school, but warned it is not time to slow their social distancing actions. He said the “underground playdates” and no longer standing 6 feet apart at the end of a driveway can have consequences.

Murphy, on what he would say to people planning to protest his social distancing measures.

“They have a right to protest,” he said. “I would prefer that they somehow do this virtually and that they’re not leaving home.

Murphy said the state is not considering making grocery stores delivery only — an idea that has been put out there by others.

“No plans right now to ban customers in grocery stores,” he said. “But we do expect operators to enforce the social distancing, the mask wearing, the hygiene that we have put through.” 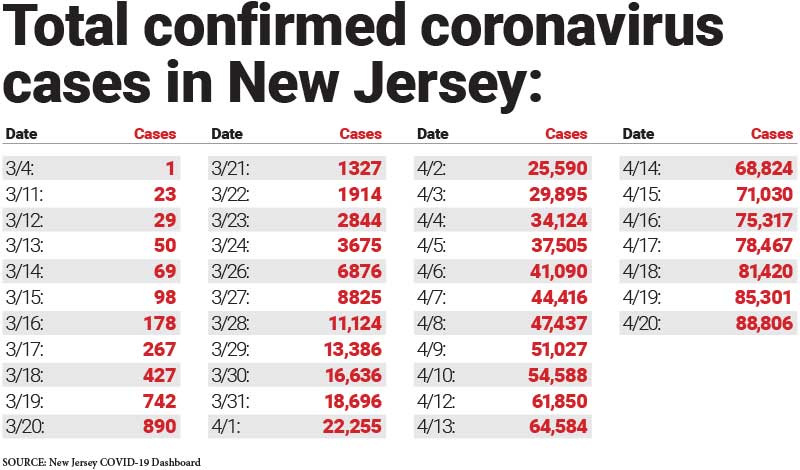 Murphy said trendlines on a number of charts were positive.

He said the rates in which cases double in a county have significantly slowed. In Bergen County, it is nearly three weeks. And he said the number of newly hospitalized patients is moving on a downward trend.

“This is one of our most-important positive indicators,” he said. “It means that our health care system is in a better position to be able to get ahead and stay ahead.”

Here are the hospital statistics, as of 10 p.m., Sunday night:

Murphy also said the recently received N95 mask decontamination unit from Battelle is being set up in Edison. The hope is that it will be able to decontaminate more than 50,000 N95 masks per day.

Murphy said the state is still not where it needs to be in regard to widescale testing, but was pleased to announce the state now has 73 testing facilities. And, while he again noted the potential of a saliva test created by Rutgers University, he said it is not enough.

“We have to be in a significantly different place in the next 4-6 weeks,” he said.

Murphy on the idea of having executive orders that are regionally based.

“No, no, no, no,” he said. “Because it will have unintended consequences that we can’t handle.”